Olu Abiola's Death Has Robbed Us of Another Patriot -Aregbesola 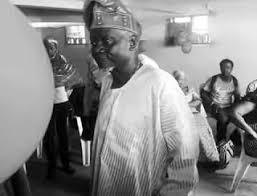 Governor of the State of Osun, Ogbeni Rauf Aregbesola, has joined people of Osun and well-meaning Nigerians in commiserating with the family of late Chief Olu Abiola, who passed on on Sunday.
He said the late Abiola was a true patriot.

In a statement by the Director, Bureau of Communication and Strategy, Office of the Governor, Mr. Semiu Okanlawon, Aregbesola described the death of Chief Abiola as a great loss to the business circle, the State of Osun and Nigeria as a whole.
The governor said the late industrialist and Chairman Unique FM radio station, fondly called Baba Olomi, was an invaluable asset in the business world.
Aregbesola said Abiola’s death has undoubtedly robbed the state and the industrial sector of another great personality.
“The death of Chief Olu Abiola is a sad one to us in Osun. Here is a man of immense qualities, which he had employed to promote everything ideal in his lifetime.
“Chief Olu Abiola, undoubtedly, distinguished himself in business sector to the extent that his name became a household one across the country.
“He made his mark in the timber industry and became one of the great Timber merchants in the country. Chief Abiola was also during his life a notable socialite.
“Throughout his life, he distinguished himself as a man of immense wealth, a perfect gentle man and an Omoluabi per excellence, which is what the Osun epitomises.
“There is therefore, no gainsaying the fact that Abiola’s exit would create a huge gap in the business and industrial in Nigeria. We are however consoled by the fact that he led a fulfilled life.
“I, on behalf of the government and people of Osun, offered our heartfelt condolences to the immediate and extended families of deceased as well as friends and well wishers.
“We pray that the Almighty God reposes his gentle soul in paradise,” Aregbesola said.