Aregbesola Continues To Succeed Despite Cuts In Federal Allocation

Governor Rauf Aregbesola of the State of Osun South West Nigeria says the reduction in the revenue can never be a hindrance to his determination to transform the state. The Governor stated this after receiving his Certificate of Return as APC candidate in the August 9 Gubernatorial poll.
Ogbeni Aregbesola stated that he had depended on the reserves since December after the allocation fell In July last year. He noted that his managerial acumen coupled with the good team he works with has been responsible for his financial success as the revenue accruing to the state has reduced by forty percent.
Addressing a crowd of supporters of the All Progressive Congress (APC) Governor Aregbesola said his hopes, wishes and aspirations for the state remain unshaken despite challenges.
The Chairman, Primary Election of the APC, Mallam NAsir El-Rufai had earlier stated that the performance of Governor Rauf Aregbesola is a yardstick which would be replicated at the center as soon as the APC takes over the leadership of Nigeria.
OSBC 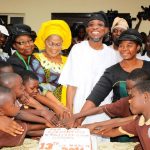 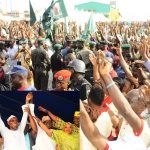