INTERVIEW: We Want To Guide The Good Foundation Laid To Fruition – Aregbesola 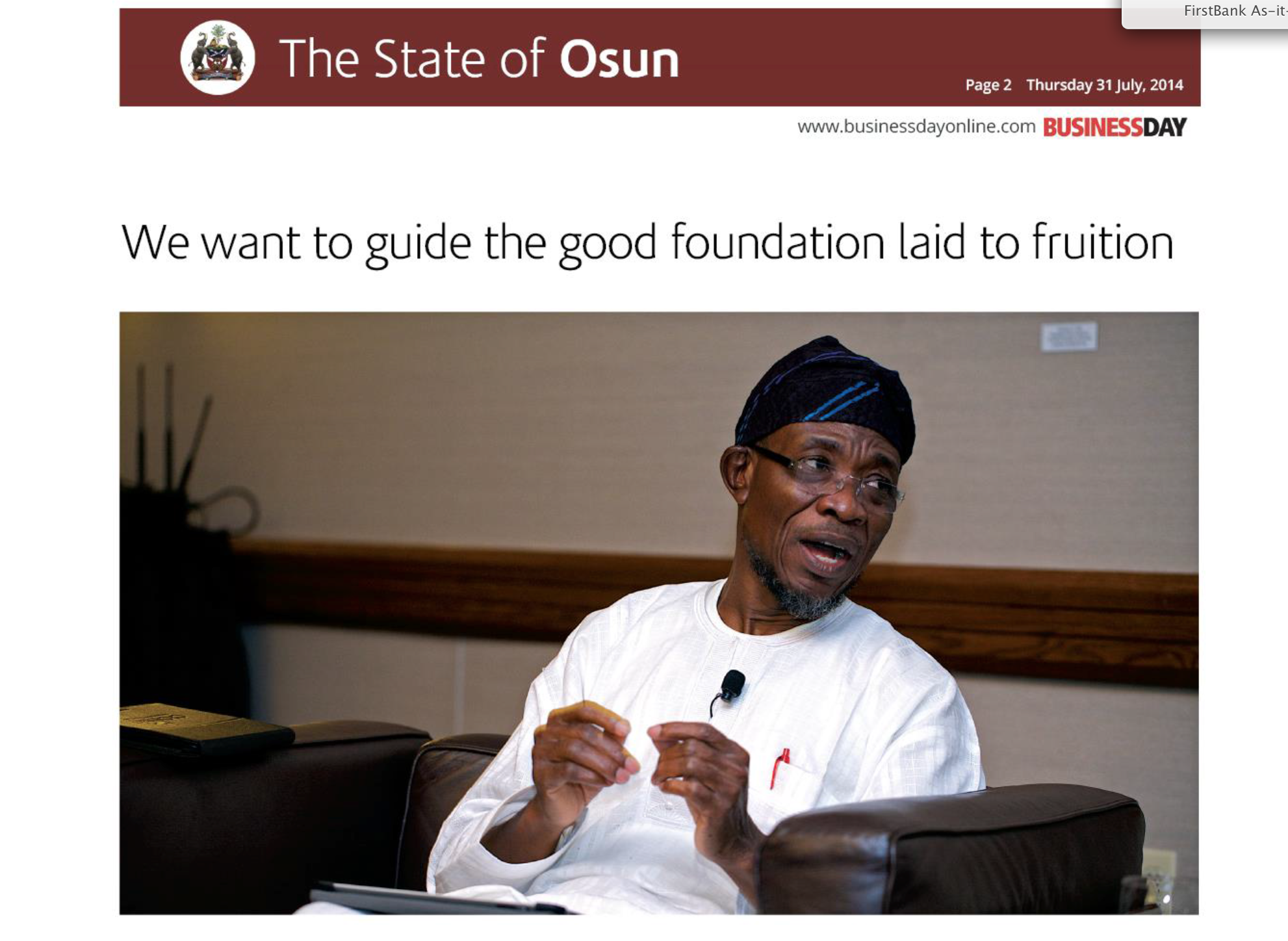 Ogbeni Rauf Aregbesola tells Business Day’s Research team that the focus of his government is the enrichment of the Common Man. He says his ambition to make the state a much better place is his driving force in seeking re- election. Find Excerpts below, you can also download a full version HERE – Ogbeni Business Day Pullout (1)
Which of your projects are you most anxious to complete?
All our projects are important to us because they are a response to the yearnings of the people. Therefore, the question of wanting to complete a particular one does not arise. Every project has a time frame. This time frame was arrived at considering the available resources and what is considered deliverable. We are on course and working diligently to deliver on schedule. We have the best investment- friendly climate in Nigeria, security is guaranteed and the air is clear and clean. There is no pollution of any nature. When you talk of agriculture, Osun now has the largest poultry industry providing eggs and chickens for the 300, 000 pupils being fed daily in our public schools. We have a huge army of young men and women who are eager to contribute their quota to society’s growth. You may have observed that there are huge constructions – roads, bridges and houses – going on in every nook and cranny of the state.
We have a large garment production outfit here which was a product of our drive at education reform. We are the first state to bring about a unified outfit for our students. It is not as some media agencies present it, “one uniform for all students” , though there is nothing bad about all students in public schools having the same uniform. Our neighbour, Benin Republic has same uniform for all students, from Primary One to HSC. So when some commentators are ignorant of such issues, we are amazed. Our own is not even one uniform for all. Our unified uniforms covers three levels of education, namely: elementary, middle and high schools. That policy influenced the development of the Omoluabi Garment Factory, which today employs 3, 000 of our youths.
The OYES programme and the need to engage the cadets led us to a partnership with a Ghanian company, RLG Communications Limited, an electronics communications company that is training 20, 000 youths on all forms of electronic devices, and also assembling electronic gadgets like computers,  mobile phones and television sets.
An airport with the longest runway in Africa with the capacity for servicing and maintenance of aircraft is under construction. When completed, the airport will be the first airport targeted at providing aircraft maintenance facilities as its primary goal. The helicopter hangar, airplane hangar, the airstrip, the apron, the width of the airport is huge. We want to be the centre of airport maintenance in West and Central Africa. This is an investment opportunity which few people consider. And of course, we know the market is big.
We are developing an investment manual on Tourism, Electricity, Industry, Commerce and so on. We are aggressively reviewing our laws to serve as a confidence building means to attract investors. Our strategy also involves the highest regard for security, law and order.
What is your vision of what you want to leave behind in Osun when your second term ends in the next Four years?
My first aim is to leave a functioning democratic system owned by the people of the state; a system where government derives from the people, is controlled by them and therefore accountable to them. I want to leave a model state, where unemployment is near zero level and more importantly, where we create enough wealth such that the government has enough of its own money to meet its daily obligation and does not need what comes from Abuja to survive.  I also believe that our investment in education would have fully matured and the pupils in our schools would have become world beaters. I can also see our urban renewal and environment programme turning our cities into modern, clean, beautiful and safe havens.
To crown it all, I want to make human beings the centre of our government and genuine agents of development. That is all. My concern is to uplift man such as he sees himself as he only agent of change. I want to elevate the place of human beings in society such that man can see himself as the core of society and driver of development. I want to see his empowerment, upliftment and progress.
Download Full Interview Here – Ogbeni Business Day Pullout (1)