Despite directives from the government of the state of Osun, asking tourists from outside Osogbo township to keep away from this year Osun Osogbo Festival as precautionary measures to check spread of Ebola virus, the festival recorded an impressive turnout of tourists.
But the state government said it has anticipated this outcome and had put in place medical facilities to screen the multitude before they are allowed into the Osun grove.
Speaking on behalf of Governor Rauf Aregbesola at the occasion, the Special Adviser to the Osun State governor, on Culture, Arts and Tourism, Mr. Ladi Soyode said the government only tried to stop people from coming to the Festival in order to prevent the spread of Ebola virus in the State.
“We wanted to limit human contacts as well as prevent contaminating the river”
He said despite the government’s warning, people still trooped out in large numbers to participate in the annual festival, which is over 600 years old.
BIZWATCH 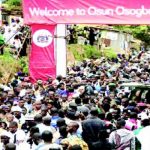 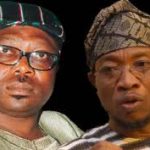