Against All Odds, Osun Is Growing Strong

I chanced upon some disappointed folks last month in Ghana who thought the Governor of State of Osun, Ogbeni Rauf Aregbesola had depressed their optimism for a rebranded Nigeria.

They were all in agreement that after the poor management of the country for 16 years by the previous PDP administration, Ogbeni ought to have spared the people of Osun the hardship by paying the state work force promptly. They went further to re-echo the Islamisation allegation that has long been addressed by Governor Aregbesola that no such plans ever crossed his mind. They accused the governor of taking Sukuk loan, the Islamic bond that the state obtained for the development of educational infrastructure.

They pointed to the Christian Association of Nigeria’s concern that it was part of the islamisation agenda of the governor for the state. The inquisition was rhetoric given the admission that banditry which took the place of governance led to the collapse of the nation’s economy and gave rise to wasted opportunities and aborted chances.

I had no doubt in my mind that the seemingly progressive gathering at the conference had some basic negative impression about the state of affairs in Osun but refused to make little grain of effort to juxtapose the present state of the State from what it used to be. Second, I was miffed that Comrade Peter Okechukwu from a state in South-South Nigeria did not know that his own state is among the 27 states battling wage payment problem.

Worst still, I was literally eviscerated that he did not address his mind to the fact that the former Minister of Finance and Supervising Minister for the Economy, Dr. Ngozi Okonjo-Iweala (from Delta State) told Nigerians in 2014 that the Federal Government has been borrowing money to pay Federal workers, even after claiming that Nigeria is the biggest economy in Africa. The Sukuk bond in question was approved by the Central Bank of Nigeria and the financial market. Even the former British Prime Minister declared that his government was set to obtain the Islamic loan.

The Federal Government under President Goodluck Jonathan also indicated its willingness to use the interest-free Islamic loan to finance transport projects in Nigeria. What the opposition thought they could use to rubbish the administration of Aregbesola ended up making him a pacesetter in financial management. A check at the Debt Management Office, DMO, Abuja revealed that Delta State which has been perpetually governed in the last 17 years by the PDP is the most indebted state in Nigeria, with a total of N320 billion.

Delta has been battling payment of wages unsuccessfully, having owed pensioners 15 months backlog of unpaid salaries! That Osun and Ogbeni have been singled out for hash criticism, even by persons whose states and political actors are criminally responsible for the national economic malaise, calls to question the real motives of these lazy critics. From the evidence of developmental stride dotting every corner of the State, it is obvious that Aregbesola has not defaulted on the promises made to his people to use the limited resources to enhance the plight of the mass majority.

The six integral action plans of the government remained the compass that guides the working and actions of the government in its core mission to battle poverty, banish hunger, unemployment, restore healthy living, promote functional education, and enhance communal peace and progress.

Ogbeni followed through to his promise. In the beginning of his administration, he employed 20,000 youths under the Osun Youths Empowerment Scheme – OYES. This singular act of compassionate governance was the first of its kind in Nigeria; more so at a time state governors across the country were laying off their workforce.

Ogbeni, unlike the prophet, is being honoured and respected at home. But a section of the media sponsored by the same forces that brought the nation to its knees have been striving unsuccessfully to disparage his administration, lampooning his job creation efforts; school recreation initiative and the re-engineering of the state being celebrated nationally and globally. Aregbesola’s government in the last six years has also mobilised youths into farming via O’REAP. Many have been trained within and outside Nigeria to embrace modern farming techniques.

Vast hectares of virgin land is being cultivated for large scale farming; loan schemes and farming equipment as well as fertilizers are regularly being provided to boost farming in the state. Little wonder that Osun has becomes the food basket of the South West. This effort has made Osun to be voted as second best in poverty index in Nigeria. The Federal Office of Statistics has also adjudged it as the best among the states with less percentage of unemployed youths.

The accusation of Islamisation of the state by the Aregbesola’s administration for a long time has been targeted at discrediting his person and government in the eye of the world. His critics know that nothing is remotely close to it. A few weeks ago the Pope’s envoy on a visit to the governor in the State described Aregbesola as a “Great pillar of supporter of the church”.

The Catholic Church described Governor Aregbesola’s government as one without ill-feeling against any sect or religion. It has always been the belief of Governor Aregbesola that religion is an instrument of developing capacity for love, instrument for refinement and testing the human will to resist provocations.

Similar sentiment has been consistently expressed by powerful Christians leaders, including Bishop David Oyedepo, debunking claims of religious bias and Islamization. In 2014 at the height of the cries of religious manipulations by the administration of Aregbesola, Bishop Oyedepo was one of the voices who establishes the governor’s innocence.

Appraising the governor’s innumerable strides and achievements the General Overseer of the Living Faith Church a.k.a. Winners’ Chapel, on July 9th, 2014, said the infrastructural renewal, particularly the education revolution in Osun deserves global applause. Bishop Oyedepo gave his assessment in Osogbo, Southwest Nigeria, when he paid a courtesy call on the Governor of the State, Ogbeni Rauf Aregbesola.

The cleric noted that any governance that is producing results and affecting the lives of vast majority of the people must be deeply appreciated, irrespective of religious inclination. The Bishop strongly appealed to stakeholders to always be at the vanguard of peaceful coexistence, noting that there is nothing like living in peace, working in peace and promoting peace. “There is nothing like peace in the whole world. We should always walk towards whatever will promote peace and peaceful coexistence among our people.

Let us work for an atmosphere that encourages peace, which engenders growth and development. This is because life is all about promoting the well-being of the people. “I deeply appreciate the infrastructural development. Besides, the educational revolution is for us a great achievement. “I can see the massive road construction going on. This is to the benefit of the people. No policy can remove the roads. I am very impressed,” Oyedepo said.

On that occasion Aregbesola come clean as always thus: “My upbringing in Yoruba setting has given no basis for religious antagonism and mutual distrust. “It is impossible in Yoruba milieu not to imbibe the culture of accommodation, tolerance and understanding of the faith of others. “I guide my faith as much as I fight for the protection of the faith of others. If anyone would accuse me at all, it should be that I have zero tolerance for fundamentalism. “Therefore, my liberal disposition to religion is thus farther from the erroneous impression of being an Islamic extremist,” Aregbesola said.

The issue of Hijab would have been rested by now, if not for want of excuse of failures on the part of PDP, which governed the State for roughly eight years before Ogbeni retrieved his stolen mandate from them. For the records, it was under Governor Olagusoye Oyinlola’s administration, a PDP Governor that the Muslim community went to court and insisted on their wards attending schools in their Islamic wears as part of their school uniform. As we speak, the matter is still being pursued in the court by the Muslim community.

Addressing Ogbeni in a borrowed robe to score cheap political points on the bases of religious fanaticism is clearly a crass political opportunism and promotion of falsehoods to a grand art. Observers of political development in Osun and Nigeria should know that Governor Aregbesola’s administration has no political, religious or tribal preference.

It is absolutely impossible for Ogbeni to be a religious fundamentalist owing to his all-faith inclusive background. One cannot but wonders why the governor has been so described by mischievous makers who erroneously tagged his administration as pro-Islamic faith. 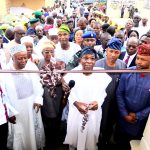 Aregbesola Launches Job Centre For Youth EmploymentAugust 17, 2016
How To Diversify The Economy – AregbesolaAugust 18, 2016