The Owalare of Ilare-Ijesa, the headquarters of the newly established Obokun East Local Council Development Area, Oba Adejoro Otebolaku, Ogidan III has appealed to the Government of the State of Osun to include the OSUOJA celebration of the ancient town of Ilare as one of the government recognised festivals in the state.

The Owalare made the appeal on Friday (9th December, 2016) in Ilare during the celebration of the OSUOJA which was observed to herald the grand finale of the Ilare Day which takes place once in every three years.
According to the monarch, the OSUOJA is the day when the Oba wears the beaded royal crown and leads natives of the community in a procession in which prayers are offered at strategic points and every household in the town.
He explained that the OSUOJA is symbolic in the sense that Ilare-Ijesa is the first settlement of all the Ijesas before migrating to other places in Ijesaland, a fact corroborated by one of his Obas, Oba Michael Oladunjoye Adebisi, the Apepeji of Ipepeji.
Oba Otebolaku stated further that the OSUOJA is as ancient as the town of Ilare and it is unique in the sense that it enables the monarch to give royal prayers and blessings to all households in Ilare individually, irrespective of their social, economic, religious or political stature.
The Owalare started this year’s OSUOJA procession with a symbolic traditional dance by the Loogun Rosinkin of Ilare, High Chief Ogundele Oluwemimo, after which the monarch started the procession of blessings and prayers round the town.
The procession took the monarch from the palace to the Community Middle and High Schools, Ilare before leaving for the headquarters of the new Obokun East LCDA, Ilare where he specifically prayed for Governor Aregbesola’s success.
A unique aspect of the OSUOJA is that at each household where the Oba offered prayers, people brought out water and salt which they poured on the ground for the monarch to pray upon as a mark of peace and prosperity.
The acceptance of the OSUOJA is evident in the mammoth crowd that accompanied the Oba during the procession singing and dancing robust traditional Ijesa lyrics as well as dance steps. 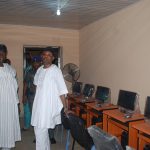