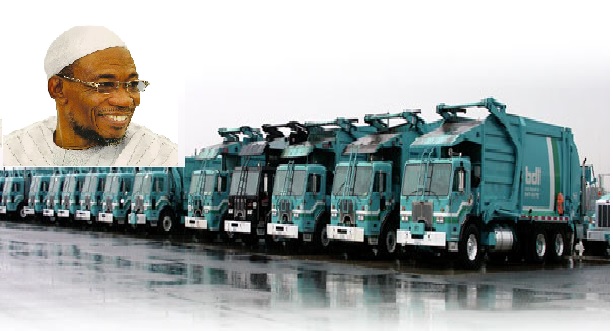 The efforts of the State Government of Osun on environmental sanitation have reduced cases of malaria from 500,000 to 200,000 as at 2011.
The governor, Mr Rauf Aregbesola, disclosed this in Osogbo, the state capital on Tuesday at the official launch of O’Clean Plus, an initiative, designed to create wealth through wastes in the state, which is the second phase of the Osun Clean (O’Clean) programmes, just as he inaugurated an Environmental Task Force to sanction environmental law offenders.
Aregbesola, who also distributed 64 new waste disposal trucks, stated that his administration is also taking serious steps towards the production of biogas from wastes for popular use of the people.
According to him, the most effective measure for good health is personal hygiene and care for the environment, as it has been reported that 1.6 million people die yearly as a result of poor sanitation.
He added that the state government has achieved the lowest maternal mortality rate in Nigeria due to the series of efforts put in place to ensure claenliness of the environment.
The governor said: “Through the O’Clean, we have been able to get the people actively involved in regular environmental sanitation exercises, which take place at fixed periods. We also got the 20000-man army of our O’YES cadets involved in street cleaning exercise on daily basis throughout the state.
“An important achievement of the environment ministry is the continued dredging and clearing the pathways of rivers and streams in the state which have checked the ugly incidents of flooding in the state. For three years running, we have been free of flooding in the state. We are happy and thankful to the Almighty that flood no longer troubles our people.
“We have since reorganised our waste management strategy in the state. We have brought in private waste collectors who go door-to-door to collect waste for a small fee. We also purchased numerous refuse collection trucks to complement the private collectors, for more effective waste management.
“As we speak, no less than 31 of these trucks are in operation across the state, with 37 drivers, for greater reach and coverage. The trucks ply different designated routes every day to collect wastes at designated points where people have been told to put them”, the governor stressed.
On the the production of biogas under the O’Clean Plus, he said that it has a variety of benefits including its use as cooking gas, electricity generation and as fuel for automobiles.
Some products of biogas reactor, he said, could also be used as organic fertilizer, while bio-insecticide can also be generated as a by-product, noting that biogas is a clean fuel that helps reduce greenhouse gas emission.
Also, the tree-planting project, called ‘Igi-Iye’ scheme, he stressed, is also in furtherance of the state green policy, aimed at lining the streets and roadsides of Osun with trees, adding that apart from their aesthetic significance, the trees will also serve as wind breakers and carbon sinks for greenhouse gases.
He said that the trees will also help to improve forestation, thereby checking the incidence of climate change and global warming, adding that for this purpose, about 2.5 million seedlings of various tree species are already being planted.
According to Aregbesola, the goal of the nylon buyback programme, also under O’Clean Plus is to arrest the menace of plastic waste and litter, which is, in fact, a global challenge.
He said: “In our own clime, plastic wastes, such as plastic bottles and water sachets are a major source of environmental hazards. So, the buyback programme is a practical, plastic waste management scheme, which will help in their recovery, recycling and reuse, thereby eliminating their nuisance value”.
He further noted that the Private Sector Participation (PSP) in the management of waste in the state is to complement government’s efforts and to also create a source of economic empowerment for more people in a win-win solution to series of problems.
While inaugurating the environmental task force, Governor Aregbesola said that the officials would be responsible for the enforcement of all sanitation laws and regulations throughout the state, saying that they would be humane but firm.
In his address, the Special Adviser to the Governor on Environment and Sanitation, Mr Bola Ilori, said that as part of the efforts to prevent malaria and some other diseases, an aerial spray of the entire state would be carried out to prevent mosquito bite.
He said that the newly-commissioned 64 trucks would be stationed on every street and people would be made to pay a token for the disposal of their waste.
The governor of Edo State, Comrade Adams Oshiomhole, represented by his Chief of Staff, Honourable Patrick Obahiagbon; the wife of the Lagos State governor, Dame Abimbola Fashola, Senator Oluremi Tinubu and the Speaker of the State House Assembly of Osun, Najeem Salaam, commended Aregbesola for his initiative at putting a stop to environmental-related diseases.
They said that his developmental stride in the state is enough to earn him second term in office as governor. 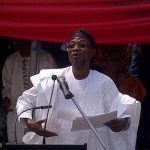 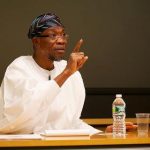