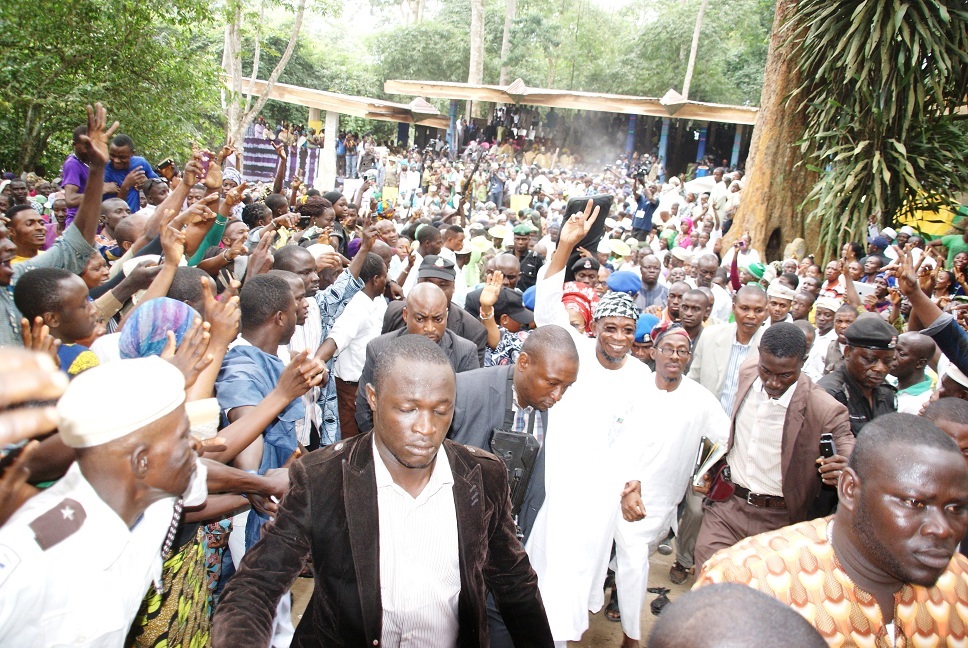 
The 2013 Osun Osogbo festival was on Friday celebrated amidst pump and pageantry in Osogbo, the capital of the State of Osun, as the governor, Ogbeni Rauf Aregbesola stated that his administration is determined to harness the prosperity of cultural tourism for sustainable development.
The ancient city of Osogbo was brought to a standstill with the presence of mammoth crowd that witnessed the annual cultural festival, with Governor Aregbesola adding glamour to the celebration.
People from different backgrounds from within and outside the country, socio-cultural groups and different traditional religious worshippers and tourists also added radiant colours to the festival.
Speaking on the significance of the festival, Aregbesola expressed joy that the city and the festival occupy a pride of place on the world map.
He noted that the age-long festival has conferred a special status on Osogbo, adding that through the yearly observance, the city has become a global cultural centre with the sacred grove inscribed by UNESCO as a world heritage.
The governor said: “Beyond promoting culture and festivals as instrument of social cohesion and wellbeing, the state government is equally unreservedly committed to heightening the economic aspect of these social affairs.
“With tenacity of purpose and unflagging resolve, we are investing in the development of tourism infrastructure. We seek to harness the prosperity of cultural tourism for sustainable development.
“Our tourist sites in Osun like Opa-Oranmiyan and Oke-Mogun in Ile-Ife; Oluminrin Waterfall at Erin-Ijesa; the Osun Osogbo Grove among others are seriously undergoing serious modernisation in order to improve their tourism potentials and capacity to generate employment and wealth for our people.
“With development in tourism, we want to massively boost private and public revenue generation in arts and crafts, tour-guides, transportation services, hospitality services, and entertainment venues like amusement parks and theatres,” the governor stressed.
Aregbesola further noted that the state government is determined to ensure that the yearly celebration of Osun Osogbo festival records progressive increase in the number of participants.
This development, he stressed, would result to increase in revenue generation and in turn, significantly improve the standard of living of the people.
In celebrating the festival, the governor charged the people of the state to continue to imbibe and deepen the non-material values of the socio-cultural engagement, which are courage, sacrifice, selflessness, brotherliness, hope and faithfulness.
In his address, the Ataoja of Osogboland, Oba Jimoh Olanipekun called for the support and cooperation of stakeholders to put up impressive performance that will further promote the cultural heritage to the outside world.
He stressed on the need for creating awareness programme on the impact of tourism on the social cultural development, saying that this will help promote the host communities and protect their traditional values.
Acknowledging the efforts of corporate sponsors and the state government support for the success of the 2013 Osun Osogbo festival, the monarch lauded the administration of Aregbesola for creating a full-fledged ministry to positively turn the face of culture around.
He also commended the governor for his giant strides towards the development of the state capital and Osun in general across all sectors of governance.
Among other dignitaries at the event were the deputy governor, Otunba Titilayo Laoye-Tomori; Secretary to the State Government, Alhaji Moshood Adeoti and other members of the State Executive Council; factional leader of the Oodua Peoples Congress (OPC); Chief Gani Adams; and representative of UNESCO among others.
Highlights of the festival include; different cultural displays, paying of homage by traditional chiefs and Osun devotees to the monarch, offering of prayers among others.
OSUN DEFENDER
551 Views
1 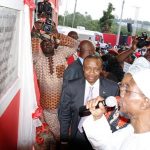