The governor of the State of Osun, Ogbeni Rauf Aregbesola, on Friday night, 30th of August 2013, addressed aggrieved residents of Alekuwodo area of Osogbo, the state capital, where a motorcyclist died in a fatal auto accident.
The accident occurred around 10:40pm at Akindeko junction, Alekuwodo area, Osogbo, where an unregistered Toyota Camry (pencil) coming from Oke-fia collided with a jicheng motorcycle with registration number OD 162 SGB.
Getting to the scene, the motorcyclist was rushed to a nearby hospital with one of the GMT vehicles, where he was later confirmed dead.
The name of the motorcyclist could not be ascertained as at the time of filing this report, while the driver of the car was discovered to have run away immediately after the accident with a view to escaping a mob action that might likely result from the incident.
The governor, while coming from his office, met the ugly incident at about 11:50pm and asked about the accident.
Aregbesola, who got down from his car, addressed the aggrieved crowd, who were debarring the police men from towing the car away from the scene, demanding to see the driver of the car.
While addressing the people, Aregbesola humbly appealed that they should allow the police officers to do their job and not to take laws into their own hands.
He added that if the police were granted the access of carrying the vehicle, it would help them in their investigations, because necessary documents would be inside the car to trace the owner.
The crowd eventually heeded the governor’s advice by complying with his appeal, as they started chanting; ‘no shaking 2014, no shaking 2014’, as he left the scene.
OSUN DEFENDER
147 Views
3 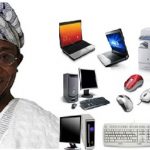 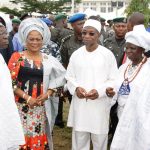