Beneficiaries of the free rail service provided by the government of the state of Osun for the Christmas celebration from Lagos to Osogbo have called on the people of the state to ensure that Governor Rauf Aregbesola is returned as the governor of the state in next year’s election.
The call was made over the weekend by the beneficiaries who expressed their belief that the various masses- friendly policies and programme will be enduring as long as Governor Aregbesola remains the governor of the state.
The continued gesture by the Aregbesola’s administration is to accord more people the opportunity to celebrate the Yuletide with their families, friends and relatives in their places of origin particularly in the state of Osun thus, boosting its economy.
The most conspicuous thing at the Iddo Railway Terminus in Lagos was the trooping in of the scores of people who came to enjoy the free rail service provided on the bill of the state government of Osun which has become a ritual during festive periods.
As early as seven o’clock in the morning, the people began to gather at the train station to join the train which took off in Lagos at about twenty minutes after ten en route Osogbo.
With no discrimination in age, sex, tribal, state or political affiliation, people who are going to other states before and even beyond Osun, like Ogun, Oyo, kwara and Niger are among the beneficiaries.
Describing the initiative of Governor Aregbesola on the free rail service as a rare opportunity which had eluded the masses in the past, a resident of Iju in Lagos, Mr Jamiu Adesunkanmi and a resident of Ikorodu who is heading to Kwara state, Mr. Fatai Olasunkanmi said, they will be forever grateful to the governor for the opportunity.
They both encourage Governor Aregbesola to keep the flag flying by continuing with the good gesture and also implored him to encourage other governors in Nigeria to emulate the move.
Commenting on the gesture, a native of Osogbo who resides in Ojota, Lagos, Mrs Bolanle Ayoola who is a buisness woman in Lagos expressed the belief that the free rail service is one out of a million people-friendly programmes embarked upon by the Aregbesola’s administration and should be appreciated by the beneficiaries while Miss Comfort Ojo described the governor as an achiever.
A resident of Agege, Kazeem Karimu a student whose destination was Ibadan and Mr.Bisi Jimoh whose destination was Abeokuta were of the opinion that the benefit of the rail service, apart from being free, include safety which is devoid of traffic log-jam, is among other crucial areas which places rail above road transportation, therefore they commended the government for providing the alternative.
They expressed confidence that, the service which was not the first time has come to stay, just as they thanked the Governor for always identifying with the masses through his various policies and programme.
Also expressing gratitude to the Governor was Miss Nafisat Kolawole who said the free rail service has afforded her the opportunity of coming down to Oshogb to see her parents whom according to her she saw seven years ago due to lack of transport fair stressing that she got the information from a friend recently that the government of Osun always organise free rail service during festive periods which prompted her to take advantage.
The general feeling and expression on the faces of all the beneficiaries was that of excitement and joy to the extent that some of them started rendering prayers for the Governor whom they described as God sent to the people of Osun and Nigerians as a whole noting that majority of the interventions of the Governor are not going to be enjoyed by the people of the state of Osun alone.
It was a massive crowd of people who have been waiting for the rail in the rail terminus where it stopped to pick people who rushed in eagerly at terminus such as Sogunle, Ikeja, Agege, Iju, Ijoko, Abeokuta, Ibadan and Ede.
BIOREPORTS 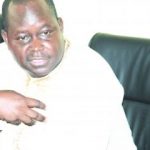