Aregbesola Sets Up Committee To Tackle School Violence In Osun

A 27 man high powered Special Committee on Discipline in Public Schools has been inaugurated; Wednesday to examine the moral decadence in the public schools in Osun.The step is in a bid to urgently arrest pockets of violence in public schools across the state.Explaining why such Committee was put together! Governor Rauf Aregbesola said that recent mindless violence in public schools is worrisome and disheartening- considering the priority his administration is giving to education in the state.
He described the recent violence in some schools as a major challenge in the middle and high schools which must be address before it spreads to the elementary schools.
“The situation is so terrible to the extent that there is the need to declare a state of emergency on middle and high school education in the state of Osun if not in Nigeria as a whole.
“Population of the trouble makers may be minute and tinny but such violence is discouraging and capable of derailing the ongoing education transformation in our state”, he explained.
The committee’s terms of reference include unveiling the level of moral decadence and discipline in public schools and recommend appropriately a long term approach to curb the menace.
Aregbesola tasked the committee to dwell as much as possible on the causes of bad habit and gross indiscipline by not sparing any stakeholder in the cause of their investigation- including teachers, principals, Local Inspectors of Education, LIE among others.
Members of the committee were urged to carry out the task with what Aregbesola described as full sense of responsibility; urging them to handle the assignment as a mater of destiny of the Yoruba race and to justify the huge resources invested on education.
“The cankerworm must be flushed out of the education sector because we want to make our state a model. That is why we rebranded it as the state of the virtuous
“The decay in the physical infrastructures of public schools has already spread to the morals of pupils. We must sanitise this”, said Aregbesola.
The Deputy Governor and Commissioner for Education Otunba Grace Titi Laoye-Tomori said it was the reclassification exercise that exposed the indiscipline among the school pupils which was difficult to imagine.
Laoye-Tomori added that the need for the inauguration is in furtherance of the administration’s policy on revamping the decadence in public schools. The committee is put in place with a view to correcting indiscipline in schools.
Acting Chairman of the Committee and Special Adviser to the Governor on Land and Physical Planning, Dr Ayoade Owoade said members of the committee understand the pulse of government, considering where it places education as first priority. He assured the governor of diligent exercise on the assignment.
MEMBERS OF THE COMMITTEE
1. Mr Sunday Akere, Commissioner for Information and Strategy
2. Prof. Mrs Funmi Tonobi, A Professor of Psychology and former Deputy Vice Chancellor, Obafemi Awolowo University, Ile Ife.
3. Hon Jonshon Ojo,
4. Hon Samson Fafiyebi
5. Hon Ademola Ajiboye
6. Mrs Latifat Giwa; a Senior Special Assistant to the Governor on Education.
7. Mrs Esho Williams,
8. Mr Lawrence Oyeniran, Permanent Sectary, Ministry of Education,
9. A representative of the Christian Association of Nigeria (CAN)
10. A representative of Muslim Communities
11. A representative of Traditional Religion Worshippers
12. Representatives of NUT and ANCOPS.
BIOREPORTS
69 Views
3
Osun School Feeding Programme, Adopted In The United KingdomDecember 6, 2013
FOOD SECURITY: Odu’a Partners Osun To Train FarmersDecember 6, 2013 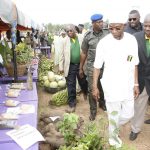