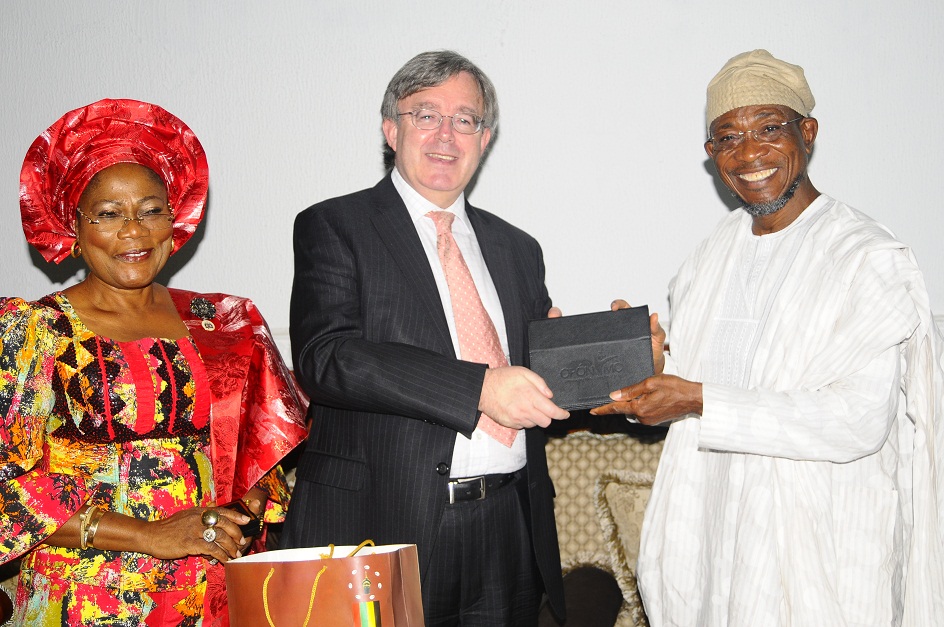 Nigeria and Britain have been enjoined to work towards deepening the existing cordial diplomatic relations, spanning decades.

The Governor of Osun State, South West Nigeria, Mr. Rauf Aregbesola, gave the advice when the British Deputy High Commissioner in the country, Mr. Peter Carter came on a courtesy visit to Osogbo.
While describing the relationship between the two Commonwealth countries as legendary and historic, Mr. Aregbesola said Nigeria is the image of Britain in Africa and therefore, needed to be accorded  top priority.
He said the administration was willing to partner with the British government in improving the educational sector, adding that great business opportunities abound in the tourism, hospitality, agro-allied and manufacturing sectors of the state economy.
Governor Aregbesola said the administration has invested heavily in education, health, security, transportation, housing   and other infrastructural development  to make it easy for investors to operate.
According to him, ”It is for the investors that we are working so hard to create a conducive environment for them to operate. We have earmarked nine towns for rapid urban renewal.
We are very serious about basic education, because that is the foundation for development. We take the issue of security very serious. We are constructing more roads to support investors, that also informed the construction of an Airport. Hopefully by May 2014, it will be completed”.
British input
The visiting British Deputy High Commissioner, Mr Peter Carter, commended   the administration’s efforts at transforming  the state from a largely semi-urban town into a modern sophisticated city.
“Your administration is dynamic, forward looking and trying to achieve a great deal. Three years into your administration… to see what you have accomplishd in agriculture, education, infrastructure, housing and attracting investors, these is commendable”, the British envoy said.
Mr Carter said the British Council has been active in the state through the training of teachers in the teaching of the English subject, adding that the Department for International development (DFID) has also been working with the government on women empowerment.
“We will work with you with the development of your sugar industry. We have got great expertise in the development of eternal and Bio-Fuel. We want to partner with you in that area.
We have investors interested in hospitality business, education, mobile money. The more you have access to e-banking, the better for the economy. That is why we are here to partner with you, I look forward to real practical results to my first visit to Osun State”, he added.
Nigeria gained independence from Britain in 1960, after several years of colonial rule. Since then the country has continued to maintain a cordial relationship with the former colonialist.
The relationship has been quite symbiotic. Nigeria is Britain’s largest trade partner in Africa.
VOICE OF NIGERIA