Reclassification Has Nothing To Do With Ejigbo Crisis

Government of the state of Osun has said that last week’s beating up of Principal of the Baptist High School, Ejigbo has nothing to do with the ongoing reclassification of public primary and secondary schools in the state and described it as an act of gross misconduct and insurbodination.
The state Deputy Governor, Mrs. Grace Titilayo Laoye-Tomori, stated this today while fielding questions from newsmen.
Mrs. Laoye-Tomori, who doubles as the Commissioner for Education, said the reclassification exercise was introduced into the state’s education sector with the sole aim of impacting proper learning to students in the state and bring out the best from them.
According to her, an advisory committee that will study the immediate and remote causes of the act, make recommendations to government on how to forestall future re-occurrence and advise the state government on necessary punitive measures that should be metted out to all culprits has been set up by the state government and will report to the state government in a matter of days.
Mrs. Laoye-Tomori thereafter advised parents to ensure proper upbringing of their children because children are leaders of tomorrrow. She said since future of the state belongs to her youths, good leadership traits must be impacted into them through proper learning.
She however submitted that no culprit in the ignoble act will go unpunished .
OSUN DEFENDER 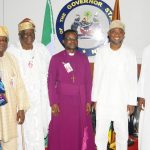