Osun State Governor Rauf Aregbesola has signed into law a bill extending the retirement age of lecturers in state-owned tertiary institutions from 60 to 65 years.
This puts them at par with their counterparts in Federal Government universities.
Commissioner for Information and Strategy Sunday Akere told reporters yesterday that the Osun Tertiary Institutions Academic Staff Retirement Age Bill, 2014, has three sections.
He said the first section deals with the time of commencement of the law; the second deals with “short life” and the third addresses punishment for age falsification.
Akere said the governor also signed the State Water Sector Bill, 2014, into law.
He said the bill provides a proper framework for the articulation of the water sector, which, if implemented, would facilitate the realisation of three of the administration’s six-point integral action plan.
The bill guarantees access to potable water supply and reduce water-borne diseases.
THE NATION 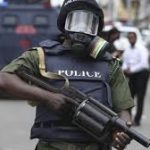 The Explosive Device Discovery In Osogbo: No One Can Shatter The Peace Of OsunMarch 5, 2014
Nigerian Police Promise To Conduct Peaceful Poll In OsunMarch 6, 2014