The Osun State Government said on Monday that it had approved a 15 per cent subsidy on agricultural implements for farmers in the state.
The Chairman of the state’s Agricultural Development Corporation, Mr Solagbade Oladepo, made this known during a board meeting in Osogbo.
Oladepo said the farmers would benefit from the government’s agricultural loan scheme, which would commence in May.
He said the state government had procured agro-processing equipment such as cassava chipping and grain processing machines, multi-grain thresher, rice reaper and yam flour processing machine for sale to women and youths at 40 per cent subsidy.
He said, “This is in line with the government’s policy to banish hunger and poverty and to create wealth and employment, which are part of the six Integral Action Plan.”
He said the commitment of farmers to food production would go a long way to reduce hunger, and thereby reduce criminal activities.
He urged farmers not hesitate to contact, visit and make enquiries at the corporation’s headquarters at Ilobu Road, Osogbo, saying that the government has packages for farmers to increase food production.
The chairman commended the state government for its continued support to farmers, especially in granting agricultural loan to improve farmers’ activities.
NIGERIAN NEWS 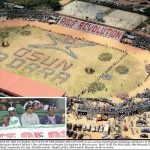