Osun CAN Harps On Prayer Over Forthcoming Guber Poll

As August 9 governorship election in Osun State draws nearer, the Christians Association of Nigeria (CAN) in Ijesa zone of the state has stressed the need to pray fervently for the state and nation to witness peaceful and hitch-free poll.

The association, therefore, organised a three-day intense prayers so that the state could witness peace before, during and after the August 9 governorship election in the state.

The prayers, which were said simultaneously in all the ten local government areas in Ijesa zone, were rounded off at the weekend. The prayers were centred on peaceful co-existence in the state and the nation at large.

Speaking after the prayer session, the CAN chairman for Ilesa East, Evangelist Jegede I. O said it is pertinent for all Christians to pray for the state, as this is their Jerusalem, quoting the scripture that says “pray for Jerusalem and those that love it will do exploit”. 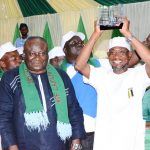