As part of efforts to curb the spread of Ebola Virus Disease, the Osun State Ebola Monitoring and Prevention Committee has organised a sensitisation workshop for Traditional rulers in the state.

The event was held at the Ministry of Local Government and Chieftaincy Affairs Conference Hall, in the state capital. Speakers at the programme were unanimous in urging the traditional rulers to join hands with the state government in the fight against the deadly virus.

In her address at the occasion, the state Commissioner for Environment, Prof. (Mrs) Olubukola Oyawoye, harped on the need for traditional leaders to educate members of their various communities on the knowledge they acquired from the workshop.

The Environment commissioner also called on the monarchs to liaise with appropriate authorities in the state in ensuring that people maintain healthy environment in their communities.

Also speaking at the event, Commissioner of Health, Dr. Temitope Ilori, disclosed that the state government was collaborating with both federal and state medical institutions to curb the spread of the virus to the state.

Director of Primary Healthcare and Disease Control, Dr. Kayode Ogunniyi, while speaking during the event, urged the people to observe hygienic living to protect themselves against the disease. 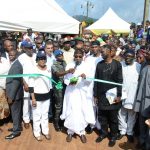