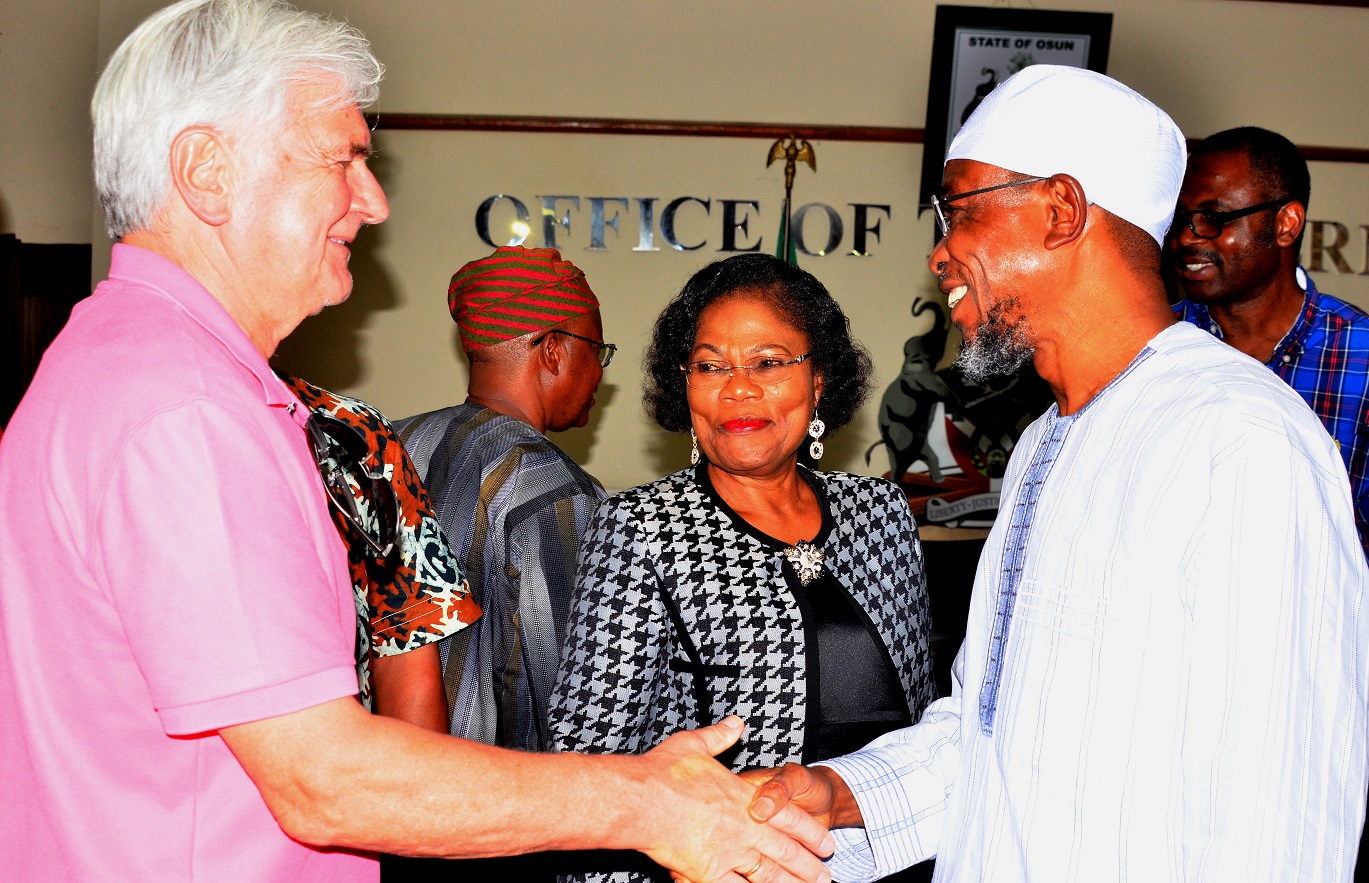 The management of World Bank has rated the State of Osun as the best among its peers in the implementation, management and maintenance of Rural Access and Mobility Projects (RAMP) being financed by the institution across the states of the federation.
The global financial institution gave this commendation through its team led by Engineer Olatunji Hammed during a second phase project presentation to the state Governor, Ogbeni Rauf Aregbesola.
Addressing the gathering, Engr Hammed disclosed that Osun State has put up an exemplary performance in the quality of its unprecedented developmental projects that centred on the lives of the generality of its populace most especially the rural dwellers.
Engineer Hammed said Osun has been able to maintain its status as the first state that has successfully maintained it roads to enhance productivity and as well as improve the economy of the state through accessible and motor able roads, linking community to community, village to village, town to town as well as city to city.
He said Osun State has always been number one as it remains the pacesetter for its counterparts in terms of rural based road maintenance which according to him, has prompted other states to come to Osun in order to learn rural access roads maintenance skills.
Hammed revealed that in spite of the fact that the state is blessed with multitude of villages, towns and cities, the state has the best roads connectivity in the country.

According to him, “Rural Access and Mobility Project has helped significantly in harnessing and exploring the agricultural potentiality of the rural dwellers in the area of transportation of farm produce to urban cities as roads rural/urban roads are being aggressively linked and exposed for easier accessibility.
“There is no doubt about the fact that many states in the country are jealous of Osun in terms of its rapid developmental projects which aims at improving the general well being of its populace as the state ever remained the best in implementation, management and maintenance of community based roads across the length and breadth of the state.
“This wouldn’t have been impossible if not for the support of Governor Aregbesola towards the Rural Access and Mobility Project which has impacted meaningfully in the teeming lives of the citizenry.
Engineer Hammed said the institution’s findings on the phase1 of the Rural Access and Mobility Project (RAMP1) and general roads construction in the state have shown the accelerated improvement in the general lives of the citizenry most importantly that of the rural dwellers as it has contributed meaningfully and productively in the agricultural activities.
Having assessed the state in terms of socio-infrastructural, political and economic developments, Engineer Hammed disclosed that the roads network in the state have the best linkage which according to him could always stand the test of time.
He extolled Governor Aregbesola’s commitment and dedication towards the well being of his people, saying he has proven himself and distinguished his administration’s uniqueness in his quest for quality and standard construction materials which has resorted to long-last and durable roads being constructed in the state since his administration.
He described Governor Aregbesola as an ardent lover of good governance and political stability, adding that his roles in bringing the dividends of democracy to the door steps of his people could not be forgotten.
He described the RAMP programme as the only alternative mechanism and instrument which government at all levels need for the successful realization of economic diversification as the country is planning to shift face and attention from being over-reliant on crude oil production to full agricultural production.
He however advocated for unwavering support and collaboration with the current government in the country and Osun State in particular in taking the state and nation to the lofty high of prosperous future.
He stressed that the state compassion on the well being and development of rural dwellers had yielded positive results as new life of economic transformation and development has been brought to those communities.

In his address, the Governor of Osun, Ogbeni Rauf Aregbesola, said Osun was the first state to involve the communities in the adoption and management of the roads across the state since the commencement of his administration.

Governor Aregbesola said the project (RAMP) is popular to the people in the state and that consciousness is linked to the need of providing the best his government could in terms of quality facilities and materials for roads construction.
He said his government having identified the needs of its rural dwellers, embarked on the massive roads network across the nooks and crannies of the state in order to break the wide gap between the people at the remote areas and urban residents.

Governor Aregbesola stated that Osun, having been rated best in the implementation of the RAMP project, has no reason to strive further in the actualisation of its comprehensive development agenda.
He pledged that the state under his watch will do everything possible to look for money to make up her counterpart fund for the phase2 of the Rural Access and Mobility Project (RAMP 11) that is set to commence.
Governor Aregbesola stressed that Osun was keen in the project simply because the state has been wrongly tagged “Civil Service State” which in reality, according to him, is a peasant agrarian state.
Why justifying his position, Governor Aregbesola said as a matter of fact the entire resources of the state even at the best of time was N4.6billion which was a period when the state received its highest allocation, saying the last chunk of this statutory allocation amounts to the sum of N3.6billion which was dedicated to payment of civil servants’ salary arrears, gratuity, pensions and other emoluments.

He explained further that the state with the population of 4.5million that received its highest allocation of N4.6billion means that as at then, it had to service the population of 4.5million, which by calculation means that each citizen would receive N1000. He said what a citizen gets cannot even cater for a day old baby for one month.
He noted that a sincere assessment of the state allocation resources and resources from Internally Generated Revenue (IGR) show that the state lives on agricultural values.
Governor Aregbesola said the state exists on the sweats and labour of those unsung men and women in rural areas who are struggling and labouring every day to improve the agricultural commodities that are painfully brought to the market.

He lamented over the dwindling allocation to the state, saying since June, 2013, the financial activities of the state had been hugely damaged due to what he described as unjust reduction.
Governor Aregbesola buttressed his point by disclosing that the state got for its September allocation, a paltry sum of N1.8billion. He said such revenue cannot be the basis for the economy of Osun.
According to him, “We engaged in Rural Access Mobility Project (RAMP) because we know that it is through this provision that we can support the economy of this state by meeting the core needs of rural dwellers, access and support the evacuation of their farm produce to the markets.
“It is because of our genuine commitment to energize the rural dwellers in their onerous duty of producing agricultural commodity that we are passionate and aggressively committed to RAMP.
“Though financially, we are highly constrained but even in spite of that constraint, we are committed to RAMP and I pledge that we will quickly mobilize our counterpart fund to usher in the commencement of the RAMP2.

Governor Aregbesola said the project implementation support programme on Rural Access Mobility Project has gone a long way at ameliorating and transforming the lives of the marginalized, dejected and abandoned people at rural areas.

He expressed gratitude to the management of World Bank for coming up with what he described as people development programme.
He said, “Without any sense of doubt, implementation of approximately 225killometers of rural roads currently being rehabilitated and constructed across the length and breadth of Osun have started yielding fruitful results going by the information reaching me and my visit to all the rural areas and project sites across the state.
“Farm produce as well as human and vehicular movement have improved considerably as farmers can easily evacuate farm produce without stress and this has increased our economy and social activities as developmental projects had speedily sprung up.
“Demand for land acquisition for developmental projects has been on increase and to say the least, it has improved our people livelihood.

“We are the government that holds our people well being and development in high esteem as we are committed to the successful implementation of project and its sustainability.
“It is not an overstatement to say that Osun is leading other participating states and we will continue to lead because we will not rest on our oars in ensuring that all necessary conditions needed for the successful implementation of this project are met. 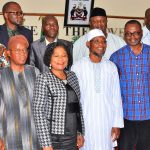 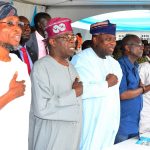