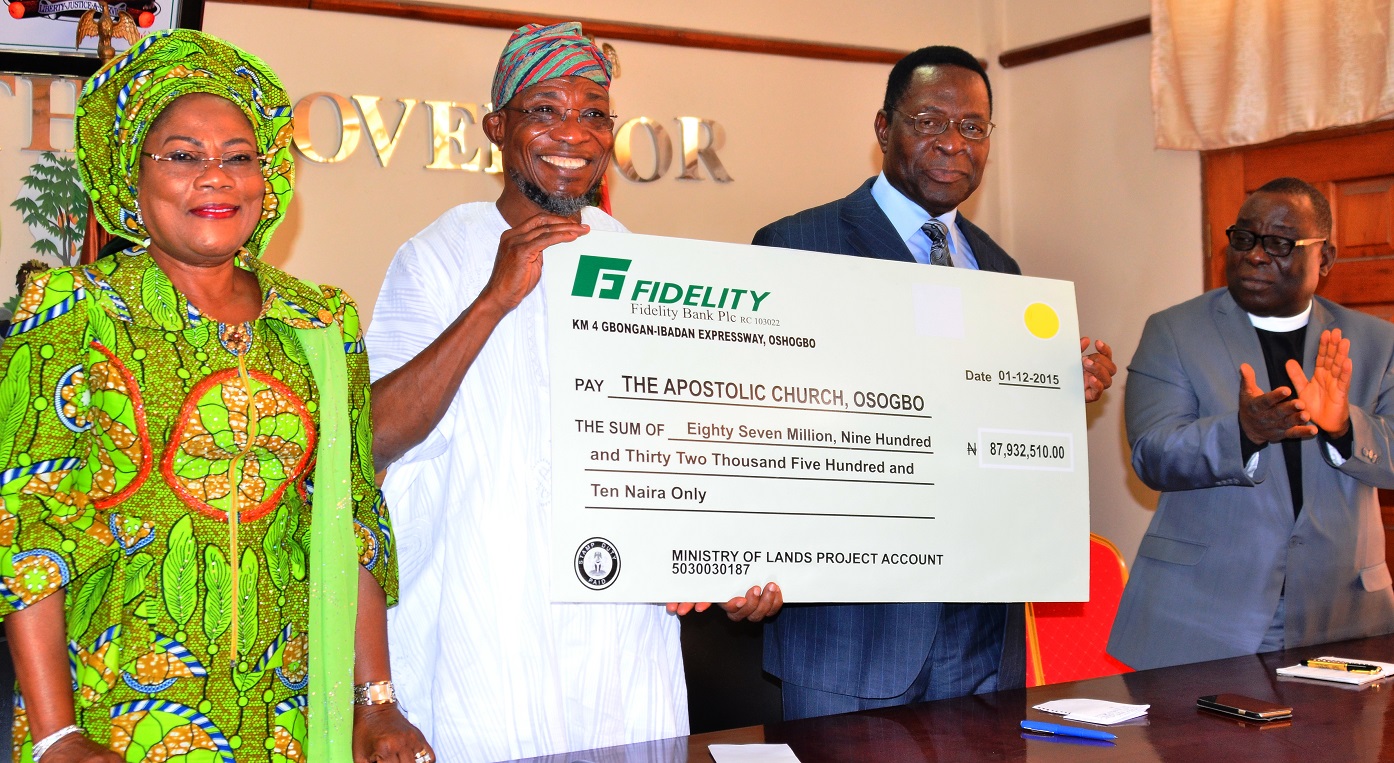 The National President, The Apostolic Church of Nigeria, Pastor Gabriel Oladele Olutola, has on Thursday expressed the Church’s readiness to support the administration of Governor Rauf Aregbesola of Osun on infrastructural development by giving up a branch of the church at the heart of the state capital for road construction.
The Clergy stated this while receiving an  N87,932,510 cheque as compensation for The Apostolic Church of Nigeria whose branch at Olaiya Junction in Osogbo has been marked for removal to allow for the construction of Olaiya-Ita Olokan dual carriage way.
‎
Pastor Olutola held that the Church is a partner with the governor in his quest to turn Osun’s fortune around for good, thus the agreement by the church on the separation of her branch for the project to enhance free flow of traffic at the popular Olaiya Junction.
He also expressed satisfaction over the decision of the state to compensate the church, saying Governor Aregbesola has distinguished himself as an epitome of transformation and performance.
Olutola noted that the leadership of the church found it easy to cooperate with government on the removal of the church building simply because it has been the principle of the church to abide and support the authority.
‎
The Clergy said, “We want to thank God today that the leadership of our church and Government of Osun were able to arrive at a meaningful conclusion that resorted in this compensation.
“Our general principle in the Apostolic Church is respect for constituted authorities and government, because the Holy Book (Bible) teaches us to obey those people in the position of authority. That is why we deemed it fit to release the church for the state to construct road which we believe will serve the general public.
“With this compensation, our Governor has really shown to us his love for peace and passion for development which has manifested and impacted tremendously in the lives of Osun people.
“It is our duty as men of God to pray, support and as well assist government in all ramifications for general success, and we are ready to continue in supporting this administration because once government fails, we all fail.
‎The Governor of Osun, Ogbeni Rauf Aregbesola however used the occasion of the presentation of cheque to the church to reiterate that his administration remains committed to its resolve to turn the state around through massive infrastructural development and financial re-engineering in the face of the present cash crunch affecting the country.‎
Aregbesola stressed that he will live up to his statutory responsibilities regardless of the current economic situation the state may be encountering.

He noted that the church was valued at sum of N57.9 million, stressing that the state having considered the constant renovation of the church resolved to add N30million to its valued cost making N87.9 million.

The Governor disclosed that his administration had paid over one billion Naira as compensation to people whose property will be affected in the course of development and transformation of the state.

He stated that his government has also made available N392 million as compensation fees for another set of 149 identified to have been affected by various constructions going on in the state.

Aregbesola emphasised that people whose property fall between Olaiya-Odiolowo axis will be compensated monetarily, while those around Isale-Osun/Ita Olokan axis would be resettled to Awosuru area, Osogbo.
He pointed out his government would not in any way trample on the rights of the citizens, saying the time has come for all and sundry to see personal sacrifice as a veritable tool to all-round development.
Governor Aregbesola noted that his government has no intention to victimise or disturb people of the state including religious organisations.
According to him, ” Before our administration, physical planning of our towns and cities was nothing to write home about as the state lacked availability of good access roads. I am confident that this era would go down in history. Our desire is to modernise our towns particularly the state capital and city centres through our urban renewal projects.

“Our joy is in the fact that the leadership of the Apostolic Church of Nigeria has agreed to our request to remove one of its branches in Osogbo for the purpose of upgrading and beatification of the state.
“Our government has set aside N392 million as compensation to our people whose property will be removed in the course of the ongoing reconstruction of Olaiya-Ita Olokan.

“We are doing this in other to give our towns a befitting look and guard against any form of human and vehicular conflict within our cities, dual carriage ways have been the priority of our administration since inception”.

Governor Aregbesola therefore commended the leadership of the church for being part of the state developmental process.

“I thank the leadership of this church for their willingness to be part of the progress of our state particularly the state capital. We thank God that your church has really cooperated and supported us, infact this is win-win for us.

“We pray God to reward the leadership of the church, the members and those who contributed to the success of this agreement” he stressed. 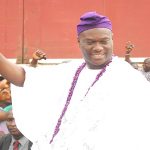 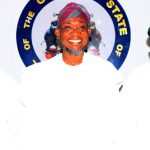