Agric, only antidote to our economic crisis – Aregbesola 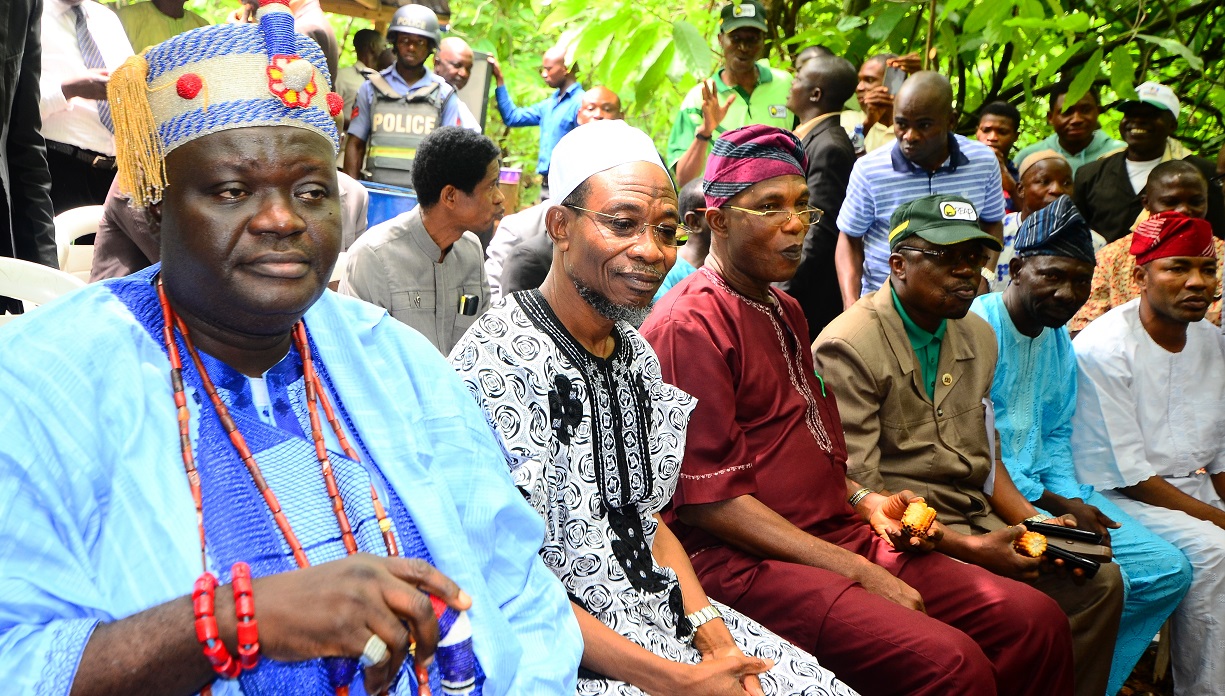 The Governor of Osun State, Ogbeni Rauf Aregbesola, has reaffirmed that agriculture is the only antidote for the economic downturn the country is going through.

Aregbesola stated this on Thursday at a crucial meeting with the farmers’ association in Erinmo, Oriade Local Government Area of the State.

The Governor, who went on an on-the-spot assessment of some farms in the Ijesha axis of the state, said the culture of free money has gone forever in the country.

He also urged beneficiaries of loans to farmers who have not paid up to meet their obligations so other farmers can benefit from the various assistance to farmers.
He called on the youth in the state to go into mechanised farming so that the country can be self-sufficient instead of relying on importation.
Aregbesola said for the country to come out of its current economic doldrums, there must be a total shift from oil money, which has contributed to total neglect of agriculture.
He said: “Today, we have seen the effect of rent economy that the country has been running for the past half a century.

“With the frittering away of the nation’s resources by the immediate past government and the drastic reduction of crude oil price at the international market, the country’s economy just went into recession.
“To come out of this economic logjam, we need to embark on massive agricultural practice.
“Agriculture used to be our economic mainstay during and shortly after independence.
“The discovery of oil in commercial quantity shifted our attention from agriculture to petrodollars.
“That abandonment of agriculture and the pursuit of oil money and profligacy of certain regimes in the political evolution of the country brought us to the present state of economy hardship.
“The cumulative effects of abandonment of agriculture and the culture of waste are what we are witnessing today.
“To get out of this economic hardship, we must retrace our steps back to agriculture.
“And this is why Osun has embarked on agriculture revolution and massive production of food crops.”

Aregbesola averred that everybody must work assiduously through farming as those who do not work cannot eat again as the situation is.

He saluted the courage of farmers for believing in what they are doing, promising that government will do everything within its power and resources to assist in boosting their production and harvesting capacity.

He stated that government would continue to provide soft loans as well as make chemicals and fertilizer available to the farmers at subsidized rate.
Aregbesola continued: “Those who do not work today will not eat.
“Everyone must contribute his or her quota to the production process.
“Farming it now the answer to our economic problem.
“Farming is the backbone of any strong and developed nation.
“We must stop our heavy reliance on imported foods.
“We should be able to feed ourselves as a nation.
“More than ever before, our government is ready to help farmers in the state in all areas they want to practise be it food or cash crop, poultry and the rest.”

Responding on behalf of the farmers association, the Chairman of the Farmers’ Business School, Moses Adekunle, commended the governor for his initiative of meeting the farmers right on their farms, saying this will give government the clear picture of what is happening and the challenges facing the farmers.

Adekunle urged the government to continue to support the farmers by providing high-yielding crop seedling, chemicals and fertilizers as affordable prices.
He said: “We are very happy to see the governor on our farms.
“This is the first time any governor will do this.

“This kind of meeting will give government insight about the development of agriculture in the state.

“We want government to speed up its rural-urban opening.

“Access roads to the markets after harvest is a major problems farmers are facing.

“If there are good roads, farm produce will reach the targeted destination on time and the kind of waste that we witness every year will reduce.”