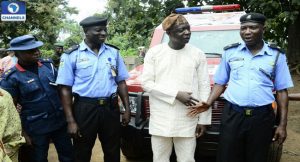 The Commissioner of Police in Osun State, Mr Fimihan Adeoye, has met the people of Kelebe communities, to sensitize them on the necessary moves required to scuttle the plans of the armed robbers who had threatened to strike in the community.

Mr Adeoye, who visited the communities along with the officers in charge of Criminal Investigation Department and the Special Anti-Robbery Squad, the Osogbo Area Commander and the Police Public Relation Officer, assured the people of Kelebe communities of adequate security.
The CP also visited the palace of the traditional ruler of Kelebe, as well as the house of the Chairman of landlord’s association, where he discussed security tips with stakeholders in the communities and told them to always call the Police whenever they notice any suspicious movement.
Furthermore, he advised the traditional ruler and the chairman of the landlords association, to ensure that the bushes in the uncompleted buildings in the communities are cleared so that it would not serve as hideout for criminals.
“I am here today to make it clear to you people that the Police is always ready and alert to attend to all sensitive issues that relate to the security of the people of Osun state‎.
“We are well aware of the tension among the people of Kelebe now, but I want you to know that the Police is ready to ensure that lives are not lost and properties are well secured.
“The Police remain the friend of the people at all times. Please if you observe any suspicious move, just get in touch with the Police and we will get the person arrested.
“We are ever ready to serve you all the time. Your safety is paramount to us,” CP Fimihan emphasised.
While the people of the area commended the Commissioner of Police for his quick intervention, traditional ruler of Kelebe Community complained that the Otaefun Police Division was too far from Kelebe and demanded for a police post at Kelebe community.
A letter supposedly written by armed robbers was circulated in the area, two weeks before the CP’s visit, notifying the residents of the community about a proposed visit by the armed robbers.
The letter stirred up tension in the Kelebe communities as some of the residents had started relocating from the area because of the impending robbery attack. 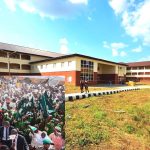