BY November 26, 2016, we will commence the seventh year of   Rauf Adesoji Aregbesola’s epic contributions as governor of the State of Osun. Hardly any governor in the hIstory of Nigeria has attracted controversy   as this personality known popularly as Ogbeni.

At least not in the last 17 years that democracy resurfaced in Nigeria has any governor’s actions and perhaps even speeches been prone to such testy public discussions.

And rightly so, because he, Aregbesola, did unique (or as he himself styled it, unusual) things that nobody dared to do before him, to the extent that not a few of his critics didn’t quite appreciate.Although most people who are beneficiaries of his programmes kept faith in what Aregbesola did and is capable of doing.

Before he was sworn-in as governor on November 26, 2010, lawlessness and insecurity of life and property were existential concerns in Osun.

History will not only justify Aregbesola’s ideas and programmes, it will vilify his critics. His mistakes will be acknowledged, but that will not diminish the quality and effect of his actions and service delivery.
It was in this atmosphere of near anarchy that he introduced his unusual programmes and rebranding of the state.All hell broke loose, and the opposition also ‘rebranded’ him – so-to-speak – as an anarchist!

However, the ‘confusion’ that people,     (especially his PDP opponents) who he defeated in the 2007 election accused him of introducing into governance, has become the catalyst for unprecedented transformation in the state of Osun today.

What Osun is now, in contrast to what it had been all of 19 years before the advent of Aregbesola’s administration, is the difference that Aregbesola himself engineered.   And what the future will become based on what the present is, shall in effect be the hIstorical perspective from which Ogbeni Rauf Aregbesola would be holistically assessed.

That is the context in which Ogbeni Aregbesola will be presented in the future that will tell the story of today.It would not matter that TRUTH flew out the window of today’s reality. We are currently living in a post TRUTH world – in a time of collapse before the new spiritual era.

So, people like Ogbeni Aregbesola may not place rationally in the warped reality that untruth has created.That is the world in which PDP critics of Aregbesola,   and those who back them operate and exist.

The simple way to recognise them is to listen to those critics in Osun who think that Aregbesola is the worst thing that ever happened to the state.They are the scoffers.

The discussion however, is not about these traducers,   it is about the relevance and significance   of the Ogbeni Aregbesola’s appearance in the state of Osun’s history.

As a journalist (a ‘historian in a hurry’), and a lawyer, I owe my profession a duty to be on the side of truth.And if the truth be told, Rauf Aregbesola is the best thing, politically, socially, economically, and in terms of security, that Osun has ever known in its 25 years as a state in Nigeria.

You, my dear readers, don’t have to believe me. To authenticate this assertion, you have to spend some time to investigate by coming to Osun to see things practically yourself and talk to people.That’s only when you will access the truth.

Mankind is moving away from TRUTH. Lies or deceit or disinformation is the major news, because the negatively disposed make the headline news.That is why the enticing news you can read or hear or   watch about Rauf Aregbesola in Osun is negative, salacious and horribly untruthful ones about the man.It is the nature of our collapsing world.

However, there are certain questions that should be answered; and we demand the right answers for them:- If Aregbesola’s ideas and programmes were as horrible as the opposition would suggest -; Why would the British Parliament ask him to come explain how he was managing the school feeding programme? Why would the Federal statistical record place primary school enrolment in Osun as the highest in Nigeria, if Aregbesola’s education policies were wrong? Why would the Nigerian Bureau of Statistics have confirmed that Osun is the the best governed state in the country as it relates to human capital development index, poverty index, unemployment index and environmental cleanliness?
Why would the Director of the Central Bank of Nigeria in the state of Osun defy protocol to give credit to Aregbesola’s policies that re-ignited economic activities in Osun like it had not been seen before? Why did acknowledgement come from a Police Chief that Osun is the best secured state in the country? These are just few questions that will lead you to a whole host of investigations that will produce results different from what Aregbesola’s critics had been propagating.

Aregbesola has significantly convinced the people of Osun the his revolutionary agenda for CHANGE is producing not just prosperity but a new Osun that can compete and excel in economic, social and human capital development that stand a modern state out of the crowd.

We will be a part of that history when we give an account of APC Aregbesola-led government in 2018. The story is still unfolding.

Kunle Oyatomi  is the Director of Publicity, Research and Strategy of APC, State of Osun. 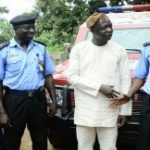