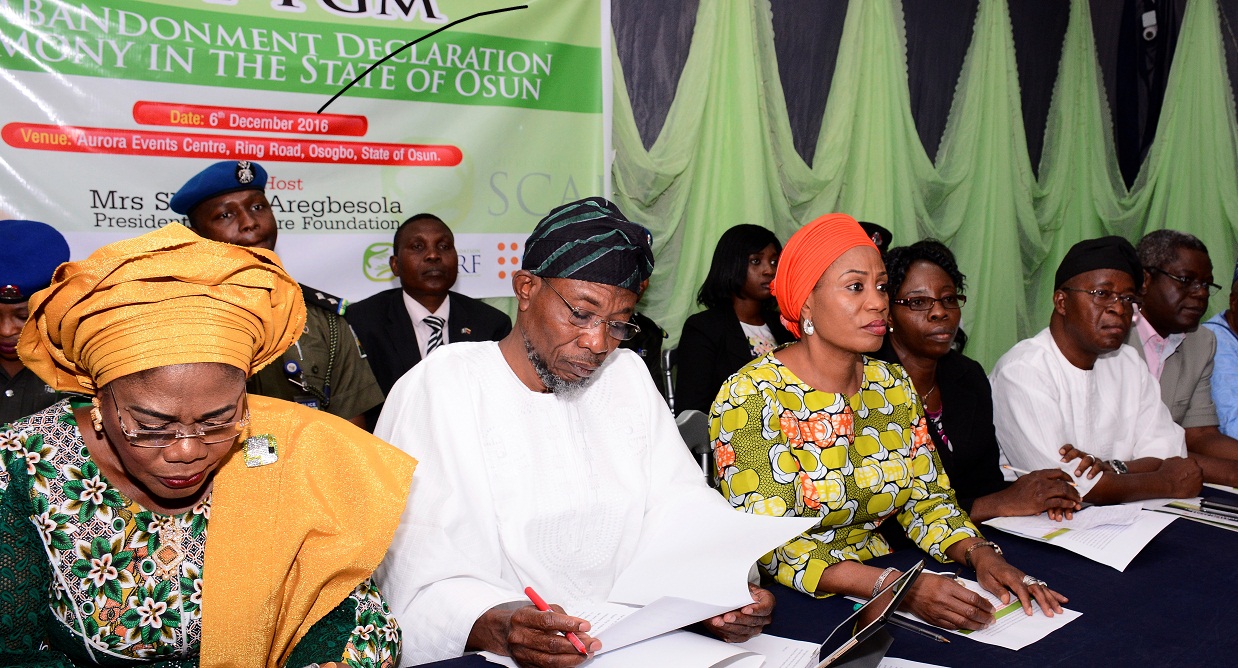 The First Lady said the current rating of Osun State as first in the practice of FGM in the country was disturbing and required urgent decisive actions to curb the menace
Osun is considered the state with the highest prevalence of female genital cutting in Nigeria.
Osun First Lady, through her pet project, Sheri Care Foundation (SCARF) stepped up the sensitization campaign by designing different pragmatic strategies and realisable approaches to stop the practice.

One of the approaches was the assemblage of stakeholders in the state; including the circumcisers at a sensitization campaign tagged “Stop FGM”, held at Aurora Event Centre in Osogbo, the state capital on Tuesday.
During the event, traditional rulers and community leaders openly declared their resolve to desist from cutting the genital of their female children and promised to join the campaign to stop FGM.
The First Lady told the gathering that the current rating of Osun State as first in the practice of FGM in the country was disturbing and required urgent decisive actions to curb the menace.
Speaking on the occasion, the state governor, Rauf Aregbesola lamented that cutting of the clitoris of female children under the pretext of cultural belief was callous and cruel.
The governor said none of Islam, traditional religions nor Christianity supported the practice.
He described female genital mutilation as obsolete and urged people of Osun State to shun the practice.
The governor commended SCARF for the war against FGM and pleaded with the traditional rulers in the state to double their efforts in prohibiting the practice in the domains.
Aregbesola also commended the United Nations Population Fund (UNFPA) for collaborating with SCARF to end FGM.
The governor urged UNFPA to assist the state to be able to find alternative jobs for circumcisers who have agreed to dump the circumcision work.
The head of UNFPA Lagos Liaison Office, Dr Omolaso Omosehin, while speaking on the occasion, said the efforts to stop FGM in Osun State were beginning to yield positive results and advised the First Lady and other development actors in the state not to relent in the anti-FGM campaign.