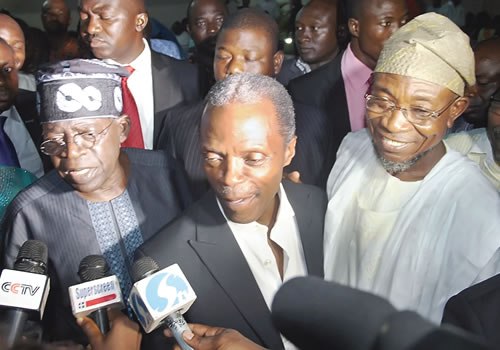 Osun State Governor, Ogbeni Rauf Aregbesola, and his Oyo State counterpart, Abiola Ajimobi have joined other prominent Nigerians to felicitate with the Acting President, Professor Yemi Osinbajo, as he clocks 60 on Wednesday 8 March.

Aregbesola, in a statement by the Director, Bureau of Communication and Strategy, Office of the Governor, Mr. Semiu Okanlawon, described Osinbajo as a judicial revolutionary whose contributions to the administration of justice have changed the face of the judiciary in Nigeria.
He said when the accounts of law reforms in Nigeria are given, Osinbajo’s robust contributions would continue to be a source of reference.
Describing him as one prominent promoter of selfless leadership, Aregbesola said Osinbajo’s trajectory of service to the people has seen him taking up worthy causes for no personal gains as long as they serve humanity well.
“In public and personal lives, Prof Osinbajo has demonstrated that the most worthy service is that carried out for the good of fellow human beings even for no personal gains and comfort,” Aregbesola noted.
Recalling his roles in the pioneering efforts of Lagos State in law reforms, the Osun Governor, who served along Osinbajo when the later was the Attorney General and Commissioner for Justice in Lagos State, said the face of Judiciary did not remain the same after eight years of Osinbajo’s intensive reforms as the Chief Law Officer.
“Today, it is gratifying to note that his pioneering efforts in that sector has influenced in no small dimension, similar reforms in other parts of the country. This is one crucial aspect of our national life as a people where the acting President has had tremendous impact.
He said the Vice President has demonstrated that he is a man of the people, always identifying with the grassroots across the country.
The statement read further, “On this occasion of your birthday, I join you and your immediate and political families in celebrating the abundant grace of God on your life.
“Your life has been an eventful one dotted by numerous achievements and accomplishments.
“Nigeria has benefited immensely from your fountain of knowledge, wealth of experience, and leadership acumen.
“The remarkable impact you have made in all spheres of human endeavour remains a reference point.”
“You are indeed a cerebral academic per excellence, a judicial revolutionary; stabilising force; a bridge-builder, an embodiment of and astute observer of the rule of law.
“This is so that you can continue to make significant contributions to the overall development of our country, Nigeria in general.
“On behalf of the government and the people of Osun, I congratulate you on the attainment of this age.”
Also, Ajimobi, in a statement issued by his Special Adviser on Communication and Strategy, Mr. Yomi Layinka, said the Acting President’s intellectual disposition to governance as well as his passion for the well-being of Nigerians was worthy of emulation.
“He has, since assumption of office, demonstrated his readiness to work assiduously with President Muhammadu Buhari in ensuring the socio-economic transformation of Nigeria through well-thought-out policies and programmes.
“His unflinching support for the president’s anti-corruption fight has also helped in sanitizing the polity and ensuring judicious utilization of the available resources for the betterment of the generality of Nigerians,’’ he said.
Ajimobi also commended his several visits to the Niger Delta region and constant dialogues with the militants which, he said, had led to the restoration of peace to the restive region and the attendant rise in oil exploration activities and improvement in the nation’s economy.
“Even though President Buhari is away in the United Kingdom on vacation, Prof. Osinbajo has risen to the occasion, while still maintaining regular contact with his boss in the running of the nation’s affairs,’’ the governor said.
While congratulating Osinbajo on joining the sexagenarian club, Ajimobi urged him not to rest on his laurel but to continue joining forces with the President in entrenching an egalitarian society that would be the pride of the ruling All Progressives Congress (APC).
Yemi Osinbajo was born into the family of Opeoluwa Osinbajo on 8 March 1957, at Creek Hospital, Lagos. Osinbajo is married to Dolapo (née Soyode) Osinbajo, a granddaughter of Obafemi Awolowo.
Yemi Osinbajo was educated at Corona primary School, in Lagos. Between 1969–1975, he attended Igbobi College Yaba, Lagos, Nigeria. From 1975–1978, he studied for his undergraduate degree in Law at the University of Lagos, where he was awarded a LLB Law degree. From 1979–1980 he attended Nigerian Law School. In 1981, he was awarded a Master of Laws after attending the London School of Economics.
From 1979–1980, Osinbajo served the compulsory one year youth services as a legal officer with Bendel Development and Planning Authority (BDPA), Bendel state.
In 1981, he was employed as a law lecturer at the University of Lagos, Nigeria. From 1983 to 1986, he was Senior lecturer of Law at the University of Lagos. From 1988 to 1992, he was an Adviser (legal advice and litigation) to the Attorney-General and Minister of Justice, Bola Ajibola.
From 1997 to 1999 he was made Professor of Law and Head of Department of Public Law, University of Lagos. From 1999 to 2007, Osinbajo was Member of Cabinet, Lagos State Ministry of Justice, also Attorney-General and Commissioner for Justice.
From 2007 to 2013 Osinbajo was once again employed as a Professor of Law, Department of Public Law, Faculty of Law, University of Lagos. In 2007, Osinbajo was made Senior Partner, Simmons Cooper Partners (Barristers and Solicitors), Nigeria. Osinbajo was also a Senior lecturer at the Lagos State University 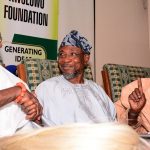 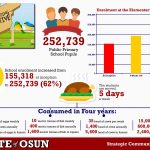