Ooni Of Ife To Address British House Of Commons On Tuesday

The Ooni of Ife, Oba Adeyeye Enitan Ogunwusi is to address the British House of Commons in the United Kingdom on Tuesday alongside other guests and Members of Parliament (MPs) at BRITAFRIQUE- an international trade, investment and tourism symposium.
This was made known at the dinner and awards event which held on Saturday night at the Ballroom of the JW Marriott Hotel on Park Lane, London.

It was organised by the outgoing chairman of the Central Association of Nigerians in the United Kingdom (CANUK), Tunde Loye, under the auspices of the Babatunde Loye – BL- Foundation, to honour Nigerians in the Diaspora and support charity works.

The Guardian learnt that the dinner was oversubscribed, leading to minor skirmish, in which the Ooni and some MPs were almost denied access into the venue.
The security men at the March Arch based hotel were said to have locked the entrance, thus preventing a handful of guests who were just arriving from entering.
Besides, guests who were about stepping out for whatever reasons were told that once they left they would not be allowed back into the venue as it was full to capacity by 9pm.
Some guests could not get seats because the reception area was already crowded with exhibitors and some of the disappointed guests.
However, former Mayor of Lambeth, Councilor Ade Aminu, was sighted pleading with the security men to let the stranded guests in.
“I have four guests outside who paid £400 and there is even a Member of Parliament among those waiting outside. These are the people that made it possible for the Ooni to see Prince Charles a few days ago,” he told the security men.
But head of the security men replied: “I don’t care whether an MP is outside or not, the people who employed me to guard the King said we should not allow anyone in again.”
Loye was not available for comments when this reporter left around 10pm. 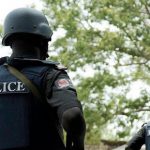