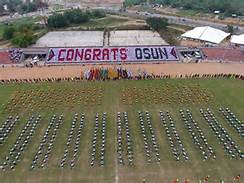 The Osun government will hold calisthenics competition for primary and secondary school students. The sport was introduced into the state school system by Governor Rauf Aregbesola.

Briefing reporters in Osogbo, the state capital on the event, Mr. Yaya Ademola, one of the team leaders revealed that the history of engaging Osun State youths in calisthenics display will not be complete without mentioning the immense role played by Governor Rauf Aregbesola who decided to introduce and engaged thousands of students of secondary schools in athletic fitness and youth leadership programmes. The aim was to enable them to cope with various challenges of life as they grow up.
Ademola noted that since the introduction of callisthenics in public schools, performances at various anniversary celebrations had been restricted to about 15,000 pupils from schools in Osogbo and Olorunda local government areas, adding that the approved template gives opportunity to selected public schools in all the nine federal constituencies as well as interested private schools to participate.
According to him, participation is voluntary. “The government will only be responsible for the training and competitions which will hold in two stages, at the senatorial level among teams representing federal constituencies and at the state level between the first-place teams at the senatorial level competition.
“In addition to trophies, plaques, medals and certificates for the participants, prize monies of N1,000,000; N750,000 and N500,000 will be won by the first, second and third place teams respectively at the senatorial level competition.
“By November this year, the 1st team in each of the senatorial level will compete for N2, 000,000; N1, 000,000 and N750, 000 for 1st, 2nd and 3rd positions respectively. The prize monies will be used by the authorities of the combined participating and the host schools for the development of their sporting facilities and activities,” he said.
He further said as the state anniversary is fast approaching, where the students will put up a superlative performance, all hands are on deck to prepare the teams for the celebration.
“Callisthenic is very flexible. It all depends on creativity. At our levels, displays take two levels, field composition and background display. Activities at the federal constituencies to the senatorial competitions are only based on the field compositions.
At the state level on the anniversary day, a background display consisting of rows of pupils seated in a gallery at Osogbo Township Stadium will be forming captions of different words and patterns, speaking to the competing teams in the main bowl.
“The background will not be competing. It will only add flavour and glamour to complement the competing teams and entertain the audience. At another level, the field composition could also play background role to form different words and captions. Display can involve from a few dozen up to thousands of persons exercising in unison.
“Callisthenic takes away pupils from average and below families away from harmful and out-of-school vile engagements into joyful and healthy activities, especially in the absence of other healthy exercises in our schools.
“It teaches discipline, co-operation and teamwork. It conditions the pupils to be physically and mentally sound. It brings participants from various backgrounds and orientation together in a happy atmosphere” he said.
Ademola noted that “the target is to institutionalise callisthenics into our schools curriculum as an integral part of processes to mould a complete new man/woman that is imbibed with tools he or she needs for daily application of life such that he or she will be completely educated in soul, mind and vision.
“Group Calisthenics endow the participants with acute sense of precision and organisational competence. Without unison and accuracy, the outcome of their efforts will not be plausible. Participants imbibe all the elements that make up a disciplined life; promptness and punctuality.
“Should a dozen participants be late to training, not to mention being absent, the entire training for other participants is endangered.
“Co-operation, team-work and unity of purpose is at the heart of the calisthenics arts and is imbibed as healthy, life-changing virtues by participants through the course of their training. Calisthenics is the only single extra-curriculum activity that infuses in participants the desired ethical contents of all-round education,” he said.

Reliance on Oil is The Basis of Our Wretchedness And Poverty – AregbesolaSeptember 26, 2017
OSPOLY Postpones Post-UMTE TestSeptember 28, 2017 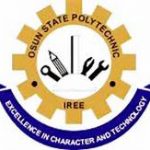