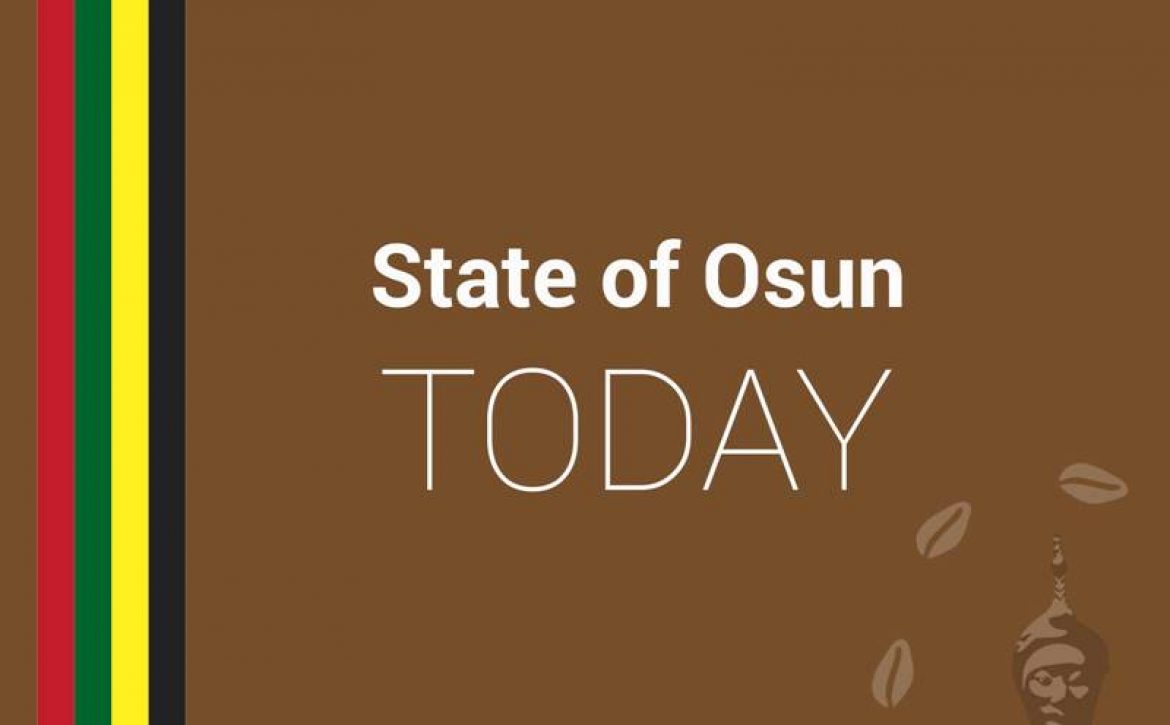 The Governor of the State of Osun, Mr. Adegboyega Oyetola, has said that the State just entered  its season of economic revolution, following the flag-off of its International Trade Centre project.

He made this known on Thursday at the ground breaking of the Osun International Trade Centre.

Inaugurating the International Trade Centre project, eight years after it was first initiated by the Ogbeni Rauf Aregbesola’s administration, Oyetola noted that the government is poised to transform the socioeconomic activities of Osun and open the State to the international community.

He said the state was committed to changing the narrative of Osun from being the civil service State to commercial and industrial based centre of the southwest zone.

Governor Oyetola noted that the need to embark on different developmental projects was part of efforts to rejuvenate the economy for the betterment of the state and good of the citizenry.

The International Trade Centre/Inland Port, a huge employment generator, will sit on 206 hectares and its components include an Inland Dry Port, an Industrial Hub, an International Trade Centre/Railway Platform, a Car Mart, a Mini Residential Development and a Storage Facilities/Warehouse, saying the project was central to the economic transformation of the State as it was designed to promote trade and commerce in the State and its environ.

He said the establishment of the international market would go a long way to facilitate rapid economic growth and development of the State, generate massive employment opportunities for the unemployed population and encourage massive production of agricultural produce, especially food crops.

Governor Oyetola added that the project when completed will reduce road mishaps through haulage of goods by rail and equally serve as a great asset for the State in particular and the country at large as great commercial frontiers would be opened.

“It is exciting that this project is seeing the light of day after its initiation eight years ago by the Ogbeni Rauf Aregbesola’s administration.

“There is no doubt that the season of economic revolution is here. Exactly this day last week, precisely September 17, we performed the flag-off of Osun Ethanol Bio-Refinery Factory located in Ayekale. Today, we are in Dagbolu to perform another feat in the realisation of our promise to engender economic recovery and transformation in the State.

“As we indicated during the convocation of Economic and Investment Summit, collaboration with core international and local partners is one of our strategies for achieving economic transformation.

“This project is central to the economic transformation of the state. It is designed to promote trade and commerce in the state and its environ; make all goods, manufactured locally or imported, for which traders in the State and neighboring states hitherto had to travel to Lagos by road with its attendant risks to lives and properties, available in Osogbo at Lagos prices.

“I wish to reiterate the avowed commitment of this government to taking the State out of the woods in this period of economic downturn and make it commercial hub of the southwest.

“I want to assure all that we shall leave no stone unturned in providing the required enabling environment for business and commerce to thrive in the State. In that line, apart from what is happening here now, we are also into negotiations with other investors who are ready to site their companies at the State’s free trade zone and industrial parks.

“By the time all those negotiations begin to manifest, we would have made a compelling statement about our promise to turn the fortune of the State around,” Oyetola affirmed.

The Speaker, Osun House of Assembly, Hon. Timothy Owoeye, applauded the administration of Governor Oyetola for diversifying the economy of the State to meet the desired results in spite of the present economic realities.

Owoeye who commended the initiative of establishing the Trade Centre in the State, expressed confidence in the ability of the present administration to take the State to enviable heights just as he appealed to the people to continue to support the government.

He assured the government of continued legislative support in the quest to turn around the socioeconomic fortunes of the State.

The Commissioner for Commerce, Cooperatives, Industry and Empowerment, Dr. Bode Olaonipekun, expressed gratitude to Governor Oyetola for continuously giving the State a facelift of development.

He disclosed that no fewer than twenty thousand trade and investment promoters have registered with the government. He added that the Trade Centre, when completed, has the capacity to host thousands of marketers and producers and as well provide jobs for over 10,000 unemployed population.

“It is a great opportunity for the State to have this kind of project. It’s opening the State’s frontiers of trade and development to the world,” he added.

The Chairman, Akbeeb Investment Limited, Chief Jumoke Ogunkeyede, commended the spirit of resilience and doggedness demonstrated by Governor Oyetola to forge ahead in implementing his campaign promises to the good people of the State.

Ogunkeyede noted that the company was motivated to partner the State in view of the readiness, determination and commitment of the State government to transforming the economy of the State.

He disclosed that the Trade Centre, when completed will play host to 50,000 traders in all kinds of product. He added: “It was the rare expression of Mr. Governor’s dedication and commitment to work even in the face of adversities that motivated Akbeeb Investment Limited to rise above its challenges and bounce back to work, hence the conceptualisation of the idea of  an international trade centre that would not only serve the people of the State but all other States within the Southwest of the country.”

As part of its effort to transform business and commercial activities in the State of Osun, the Administration of Governor Adegboyega Oyetola will on Thursday 24th September, 2020 officially flag off the commencement of the International Trade Center Inland dry Port in Dagbolu along Ikirun road. The Trade Centre Dry Port which is a joint venture between the State Government and AKBEEB Investment Ltd is expected to be a Commercial ‘Hub for the south-west..

A release by the Commissioner for Commerce, Industry, Cooperatives and Empowerment, Dr. Bode Olaonipekun indicates that the International Trade Centre would be a great asset the State would have as great commercial frontiers would be opened.

According to the release, the ground- breaking ceremony of the commercial hub would come up by 10 o’clock in the morning at the Project site in Dagbolu along Ikirun road. 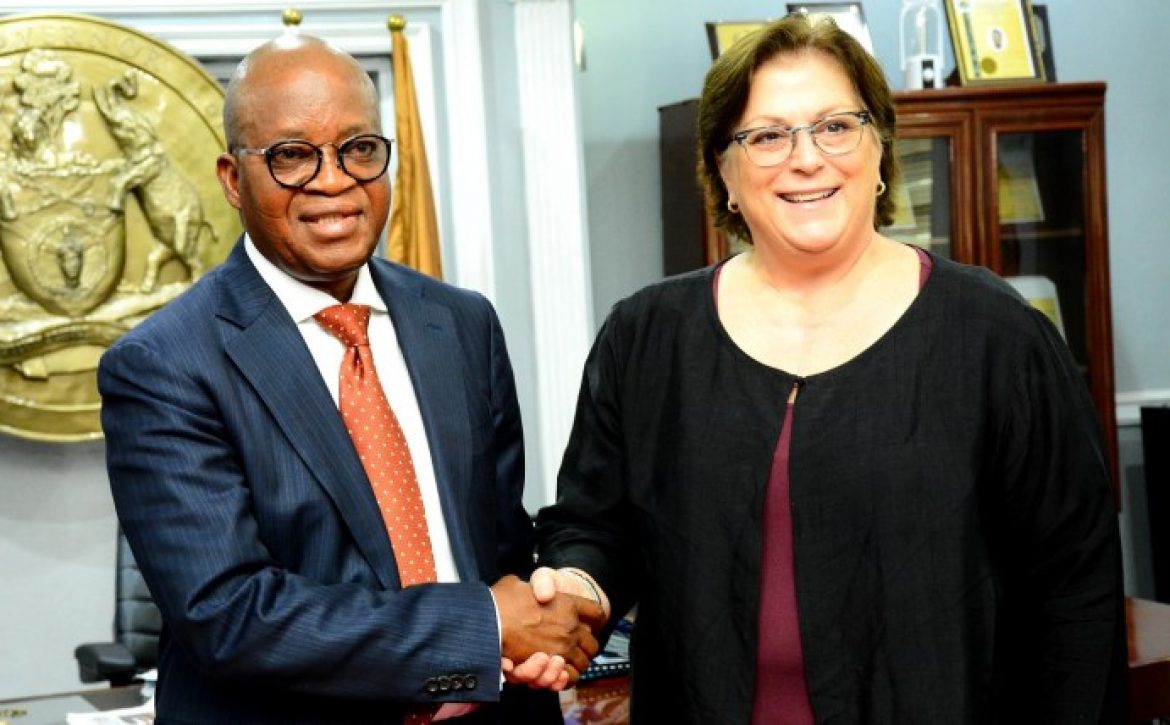 The Government of the United States of America through its Consulate in Lagos has expressed its readiness to partner with the government of the State of Osun to develop the State’s tourism sector.

The Consular General of the US Consulate in Lagos, Ms Claire Pierangelo said this on Tuesday when she and her team  visited the United Nations Educational, Scientific and Cultural Organisation (UNESCO) certified Osun Osogbo Groove situated in the heart of the state capital.
Pierangelo who was conducted round the Groove by the State’s Commissioner for Tourism and Culture, Dr Adebisi Obawale, was marvelled by the trends of cultural displays at the groove, ranging from the history of Osogbo as narrated by the Osun Osogbo Groove Curator, Mr Fatai, to the cultural dance and Sango (God of thunder) display by the Osun Cultural Troupe.
The Commissioner who disclosed that the visit to the tourist site was part of the itinerary of Pierangelo and her team in the state, noted that the partnership was a good development that would boost the tourism sector and improve the State’s economy.
It would be recalled that the Consular General paid a courtesy call on Governor Adegboyega Oyetola on Monday at the Governor’s Office, where she lauded the State government’s commitment and unprecedented success in the Health sector. 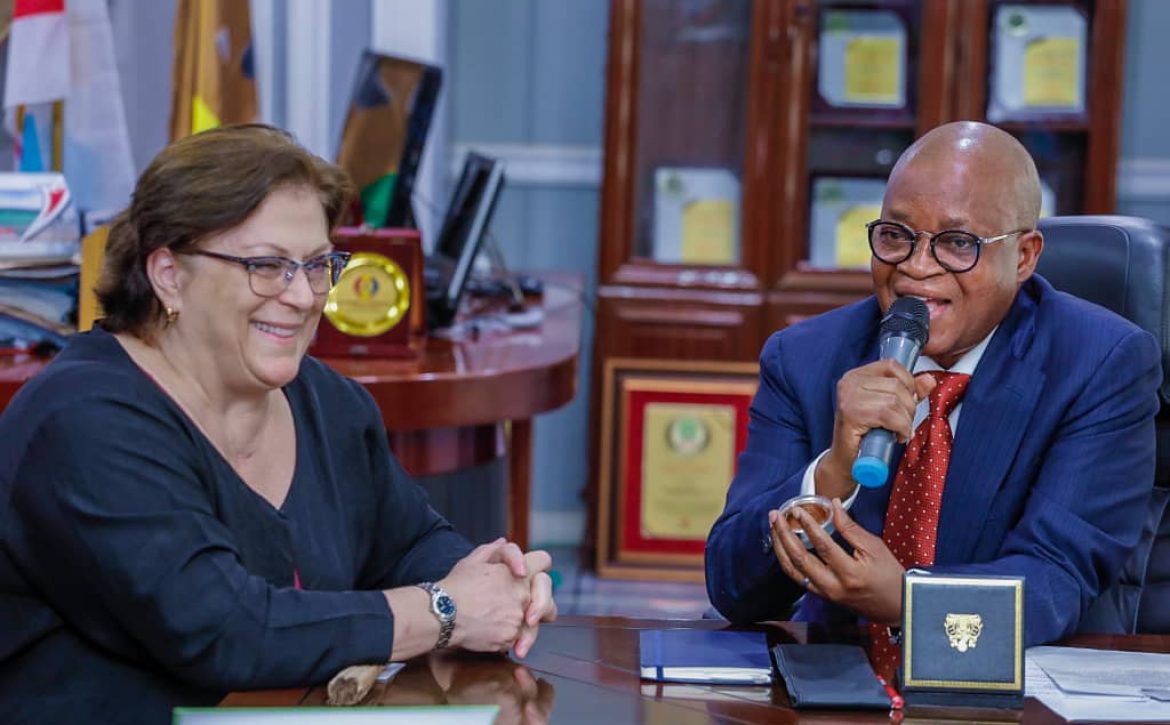 …as Oyetola reels out investment opportunities across sectors

“We are ready to partner with you. We have a very good business environment and we believe in the rule of law and we don’t renege on contract and agreement once signed. We keep to terms and conditions of business. We are supporting artisanal miners to ensure that our youths are engaged in mining.

“Our state is one of the vocal states that are being used as pilot for  Presidential Artisanal Mining Initiative of the Federal Government. We have asked our youths to go into cooperative to actualise this, but we are looking for commercial mining to realise a very good return. Our gold has been adjudged as one of the best in Africa”, Oyetola added.