“Justice is a value that is universally desirable but the rule of law is of vital importance in bringing it about. This underscores the invaluable role of the Judiciary as the champion of the rule of law, as well as the arbiter of justice.”
These were the words of the Governor of Osun State, Ogbeni Rauf Aregbesola, while delivering an address titled “In furtherance of Justice and the rule of law” at the swearing-in ceremony of Justice Oyebola Adepele Ojo as the Chief Judge of the State of Osun in Osogbo yesterday.
Aregbesola noted that the sustenance of justice is a task for all, not for the Judiciary alone; saying justice in a society is also a cumulation of the micro-level activities of all of its members.
‘…we’ve worked on 900 km of roads’
Osun State governor, Mr. Rauf Aregbesola has said about 900 kilometres of both inter and intra-city roads have either been completed or under construction since his administration came on board in the state about two and a half years ago.
Speaking at the flag-off of the construction of 30 kilometre super-highway named Omoluabi Motorway, Aregbesola said that Osun will, within the shortest possible time, boast of the best road network in the Nigeria.
Also flagged off was the construction of the Chief Adebisi Akande Trumpet Interchange Bridge which connects those traveling on the Ibadan-Ile-Ife Expressway with those coming to Osun through Gbongan.
According to him, good roads are critical to the modern state, adding that physical transportation of human and materials is primarily by road in Osun.
Source: http://osbcng.org/2013/06/18/aregbesola-swears-in-first-female-cj-for-osun/ 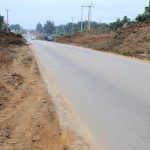