OSUN State Governor, Rauf Aregbesola, has reiterated his commitment to catering for the huge beef demand in the state and the South-West, instead of sole reliance on some parts of the country.
The governor spoke at Oloba Cattle fattening hub, Iwo, on Friday, during a ceremony marking the kick-off of ram sales for this year’s Eid-el-Kabir celebrations by the state government.
Aregbesola, who was represented at the event by Secretary to the State Government, Alhaji Moshood Adeoti, stated that his administration is ready to create an additional 10,000 jobs for people through the Oloba Farm and other farms that would be developed across the state.
He said that it is the intention of the government to raise the cattle hub to international standard, adding that the farm will be managed through private sector operators in a public private partnership with the government.
State Commissioner for Agriculture and Food Security, Mr. Wale Adedoyin, said the decision of government to embark on the development of the farm is to reduce the hardship people face in transporting rams from other parts of the country.
Earlier in a welcome address at the event, the Director General of the Office of Economic Development and partnerships, Dr Charles Akinola, said that this year’s sales indicates a lot of improvement over the previous year, stressing that the government is so much committed to creating food sufficiency for the people of the state.
THE GUARDIAN 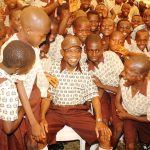