The Assistant Inspector General, AIG, in charge of zone 11 with the headquarters in Osogbo, Mr. David Olufemi Omojola, yesterday assured that the governorship election holding in 2014 in Osun State of Osun, one of the states under his command would be peaceful and hitch-free.

Reiterating the ever-preparedness of his boss in Abuja, the IG, Mohammed Abubakar, the zone 11 AIG told He gave the assurance while speaking with journalists in Ibadan, the Oyo State capital, during his routine visit to the state Command.
While reiterating the ever-preparedness of the Inspector General of Police, Mr. Mohammed Abubakar, he said the force will do everything humanly possible to ensure that the election in Osun State turns out peaceful.
He assessed the outgoing year in the entire zone, describing the year as a peaceful one generally, stressing that they did all they could at the level to key into the agenda of the IG for effective policing and everything went peacefully well.
Speaking on his visit to the Oyo State Command, he described it as a necessity for the ‘commander to keep in touch with his men on the field’ and commended the officers and men of the command for giving a good account of themselves.
NATIONAL MIRROR 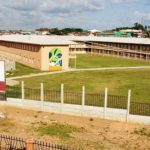