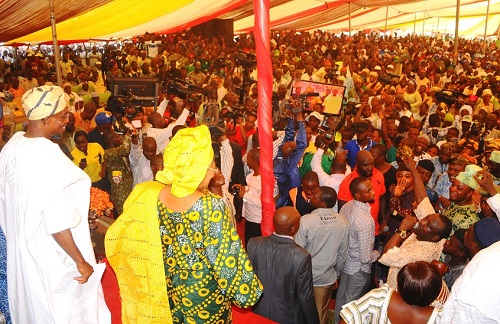 The paramount ruler of Ijesha land, Dr. Gabriel Aromolaran, yesterday lauded the three years administration of Governor Rauf Aregbesola in the state, describing it as uncommon in the history of governance in country.

The monarch disclosed this at a public forum tagged; “Gbangba Dekun,” the sixth of its kind at Ilesha Grammar School, Ilesha.
He said what Aregbesola’s government has accomplished in three years will take another government 10 years to achieve.
Oba Aromolaran noted that in the last three years, the state has witnessed all round development as never before in its history.
He listed education, employment opportunities, food security, health, the innovative ‘Opon Imo’ (Tablet of Knowledge), training and retraining of health personnel and teachers and youth development as some of the outstanding programmes of the government.
His words: “Governor Rauf Aregbesola has given an outstanding performance in the last three years. What he has done in three years is an achievement of 10 years for some other governments.
“His coming is divine. No one can defeat whom God has supported. But for prayers, the governor would not have retrieved his mandate. We are still praying fervently for his second term.”
The monarch, however, called on the governor to intensify efforts on security in the state, so that the peace being enjoyed by the people can be sustained.
He also charged the people of the state to support the governor in his second term bid.
Reacting, Aregbesola said Osun has witnessed huge development owing to the harmonious relationship between the executive and legislature in the state as well as the support and cooperation of the people of the state.
NATIONAL MIRROR