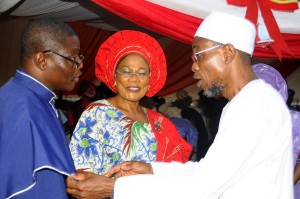 Governor Rauf Aregbesola of the State of Osun has called on religious leaders to pray fervently for the sustenance of peace and progress in the state as it enters a gubernatorial election year.
Aregbesola made the call on Thursday January 2, 2014, at the interdenominational service organized by the State Government to usher in new year 2014 held at office of the Governor, State Secretariat, Bola-Ige House, Osogbo.
The governor who expressed his believe in the efficacy of prayers warned against violence and other criminal acts that could cause chaos and disrupt the existing peace being enjoyed in the state.
The state helmsman acknowledged the support and cooperation of residents of the state for his government since inception in 2011, promised to complete all ongoing projects before the year runs out.
While urging parents and guardians to ensure proper care of their children and wards, Aregbesola enjoined teachers to keep close watch on the pupils they teach so that government’s objectives of molding them as leaders of tomorrow would not be a mirage.
In their separate preachings, the Chief Imam of the Federal Polytechnic Ede, Alhaji Taofeeq Abdulhameed and the State Chairman of the Christian association of Nigeria, Reverend Elisha Ogundiya enjoined people to see their leaders as God’s representatives on earth who should be assisted morally and spiritually.
Alhaji Abdulhameed and Reverend Ogundiya told the leaders to always seek the face of God in all they do and also appealed to people to shun sycophancy.
Highlights of the programme were several prayers offered by the President, League of Imams and Alfa in the Southwest, Edo and Delta, Sheikh Mustapha Ajisafe, Chairman of the State Muslim Community, Sheikh Salaudeen, Imam Lere Yusuf, Chairman, United Imams and Alfas, State of Osun,
Others were; Sheik Muhammed Jamiu Idris, Chief Imam of Ilesa Land, Olayiwola, Bishop Leke Abegunrin, Prophet Gabriel Fakeye and the Araba awo of Osogbo Land, Chief Ifayemi Elebuibon, Chief Esuleke, among others.
The programme had in attendance members of the State Executive Council, Traditional Rulers, the State Security Chiefs, Market men and women, members of NURTW, RTEAN, LNC, NATA among others.
BIOREPORTS 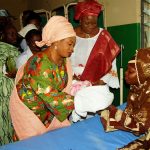