OSBC TV To Be Digitalized 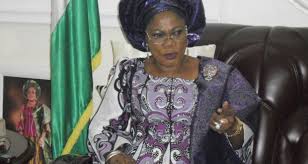 Deputy Governor of the State of Osun, Mrs. Grace Titilayo Laoye-Tomori, has restated the commitment of the state government to fully digitalize Osun State Broadcasting Corporation (OSBC) in no distant future.
Mrs. Laoye-Tomori gave this assurance in her address at the Motivation and Award Party organized for board members,management and staff of OSBC family held within the premises of Ile Awiye,Oke-Baale, Osogbo.
Reading from her speech titled; MOTIVATION, A KEY INGREDIENT FOR EXCELLENT PERFORMANCE, the state Deputy Governor described members of staff as greatest asset of any organization that is willing to succeed in her service delivery adding it is incumbent on organizations to place high priority on welfare of their members of staff with a view to bringing out the best from them.
Appreciating OSBC family for being a worthy partner to the state government through wide coverage, the corporation has accorded activities and programmes of the state government since its assuming office three years ago. The state Deputy Governor commended OSBC for all her educative and informative programmes as well as balanced news reporting.
Speaking on performance of members of staff of the corporation together with comparing the corporation with sister corporations across the country, Mrs. Laoye-Tomori rated OSBC 89% in terms of performance and urged members of staff to be dedicated to duty and join hands with the board and management of the corporation to become one of the best in the country.
She then enjoined staff of the corporation to be result oriented, make punctuality, neatness, hardwork and dedication to duty their watchwords in the New Year saying viewers of OSBC should find the station worthy of appreciation.
In his address, OSBC Board Chairman, Mr. Kola Akanji, appreciated the state government for equipping the station with latest working tools, appointment of new members of staff together with training and re-training of staff which have transformed into making television and radio stations of the corporation the toast of all.
He said the entire OSBC family will leave  no stone unturned in the quest to continue to educate, entertain and inform her listeners and viewers adding that dedication of members of staff is guaranteed.
In his keynote address, Director General of the corporation, Prince Soji Fadehan, thanked the state government for her unprecedented support to the corporation as well as the untiring effort of Chairman and Members of OSBC Board to make the corporation sit among the best in the country.
Prince Fadehan thereafter tasked members of staff to double their efforts and give their best to duty saying the proposed digitalization of OSBC is a challenge to them all and could lead to success if all hands are on deck.
OSUNNEWS