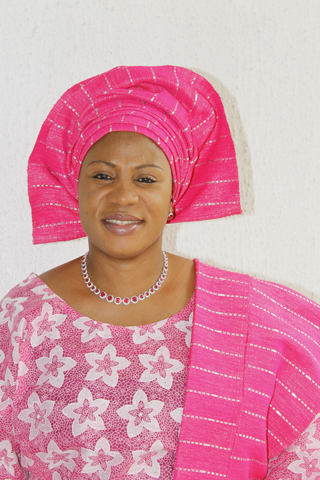 Osun State governor’s wife, Alhaja Sherifat Abidemi Aregbesola has said that the commitment of the state government to environmental sustainability has changed the living condition of the rural dwellers in the state.
Alhaja Aregbesola who is also an Ambassador of Community Led Total Sanitation, CLTS, stated this at an award dinner organized by the Nigeria Union of Journalists, NUJ, Osun State Council in Osogbo.
The wife of the governor who also received a golden award in environmental and community services on the occasion noted that her intervention in the area of environmental sanitation and promotion of hygienic living had impacted positively on the lives of residents of the state.
She maintained that the award would further spur her to intensify campaign and enlightenment on dangers embedded in open defecation hence the need for stakeholders to support government in its bid to the improve standard of living of the citizenry.
The first lady lauded journalists in the state for their ingenuity and adherence to the promotion of professionalism in the discharge of their duties, submitting that the media is key to sustainability of the nation’s democracy.
Speaking, Osun state deputy governor, Mrs Titilaoye Tomori who described the award bestowed on the wife of the governor as a well deserved honour, maintained that journalists in the state were very active and objective in their reportage of government activities and programmes.
Mrs Tomori said government would continue to give priority to the  welfare of journalists, pointing out that government had concluded arrangement to digitalize the state broadcasting corporation.
In a remark, the Programme Manager, Osun State Rural Water Environmental Sanitation Agency, RUWESA, Alhaji Posi Adiatu noted that the award bestowed on the first lady was a strong indication that people were noticing her remarkable contributions towards environmental sustainability in the state.
NIGERIAN PILOT