Governor Rauf Aregbesola of the State of Osun, has debunked the allegation being peddled around by the former Head of Service and the governorship aspirant of the Social Democratic Party (SDP) in the State, Elder Segun Akinwusi that the present administration is planning to sack workers.

Aregbesola noted that while other states due to the poor economic condition of the country are planning to cut down the salaries of their workers, Osun, under his leadership, would rather continue to work hard at meeting government obligations to workers and accord their welfare priority attention.
The governor who described Akinwusi’s allegation as baseless and a figment of his imagination, told workers that the present administration does not have it in mind to sack workers or cut down their salary.
Governor Aregbesola addressed the spurious allegation on Thursday May 1, 2014, while addressing a mammoth crowd of people consisting of civil servants, informal workers, traditional rulers, market men and women, students, political office holders among others who converged on the Government Technical College, Osogbo to mark this year workers day.
According to the governor, inspite of the dwindling allocation by almost 40 per cent since January 2013, Osun government still keeps its entire work force.
Aregbesola who charged civil servants and the entire citizens of the state to be alert and avoid being deceived, said the present administration has never contemplated the idea of retrenchment of workers, but is rather committed to the welfare and progress of all the workers.
He said: “We have the most workers friendly government that the state would ever have and we will ensure that the welfare of workers are not being tampered with. I am saying it categorically clear that this government has no intention to retrench workers, rather this government is committed to the welfare and progress of all of you.” he stated.
According to him, if he has an agenda to sack workers, Akinwusi would have been first casualty. “If I have intention to retrench I would have retrench Akinwusi himself when he was in service, I was kind with him, I gave him the car he used and everything, shame on him. The lies he was fabricating against us, is nothing but a blatant lie. With all the pressure mounted on me to remove him as HOS when I assumed office, out of compassion and my friendly posture, I retained him to complete his years in the service before he retired. It is therefore absurd and an act of insincerity and dishonesty for Adewusi to be spreading such unsubstantiated news about.” he declared.
On the why there has been a little delay in the payment of salary of the workers in the state, Aregbesola said, though, there may be delay but not that the government did not pay the salary, adding that the delay was as a result of the slash in the federal allocation.
He further explained that the recent lunching of the Osun Civil Servants Identity Cards and Bio-metric Automation of “I AM ALIVE” for the pensioners, was another testimony to the fact that the present government does not toy with the welfare of its workers.
Aregbesola noted that with the introduction of the smart card, any worker can withdrawn from his or her own bank account at any time and at any place, even though, he or she does not have money in that account once he/she is a worker.
While reacting on the present security challenges facing the country Aregbesola lambasted the Boko Haram sects for the abduction over 200 female students, saying such dastardly act was so disheartening for it lacks any justification.
He, therefore, called on all Nigerians and the security agencies in particular, to unite in one voice and say no to the continuation of the obnoxious action of the so called Boko Haram for Nigeria to witness peace.
Earlier, the Chairman, Trade Union Congress, State of Osun Council, Comrade Oladele Francis Adetunji expressed concerned on the current security challenges of the country.
Adetunji explained that, May Day Celebration required merry making but workers were sad because of the security situation in the country especially in the North, which he said has been in turmoil with the menace of the Bako Haram sect.
He noted that during the last year May Day Celebration, workers in the state through their speeches called on the Federal Government and Security agencies to find a lasting solution to the problem of Boko Haram, saying instead of the problem to be properly addressed the trend is rather getting worse. He challenged the Federal government and all security operatives in the country to brace-up and wipe out the faceless coward calling themselves Boko Haram.
He noted that the State of Osun as the most peaceful one, Adetunji appraised the effort of Governor Aregbesola for painstakingly bringing and maintaining peace in the state.
Adetunji commended Aregbesola for the peaceful atmosphere that pervades the state and the developmental programmes which cut across every sectors in the state, saying the school feeding programme of the administration would make the parents and pupils remain ever grateful to the state governor as it contributes to the healthy living of their children.
He identified other areas the administration has done very well as; infrastructural development, payment of stipend to the aged people in the state under AGBA OSUN Programme, flood control, building and naming of the Freedom Park after the renowned Freedom Fighter and former South African President, Nelson Mandela, among other achievements.
He urged the people of the state to shine their eyes when they go out massively to vote during the forthcoming governorship election slated for August 9, 2014.
BIOREPORTS
207 Views
12 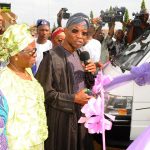