Aregbesola: The Politics Of Welfarism

“Welfarism is an attempt in governance to bring health, wealth and happiness to all”

There is this pervasive view of politics in this part of the world that claims that politics is all about interest of individuals, or groups and the best ways to achieve this self-interest, however it is true that good governance is one that strives to please all, notwithstanding religious or social affiliation, while also maintaining social order and upholding societal values.

The above task looks so simple on paper and especially, when being debated upon in the worlds of public opinion and social evaluation, but as a student of politics, I know it just happens to be a daunting herculean task to bring about consensus and provide general welfare for all.

I believe it is obvious to the most-biased of political minds that the State of Osun, under the welfaristic auspices of Ogbeni Rauf Aregbesola, has carried out the best welfare oriented government since the great AWO in the 60s with many positive changes and strategy oriented visionary programmes that, if duly-followed, will not only take Osun to greater height, but put the humble Ogbeni on the same historical pedestal with the likes of AWO and other great progressive minds. It is vital to note that the key to a sound politics of welfarism is sound strategic planning which Baba Awolowo utilised with great grace and one which the South West will continue to enjoy.

However, it is only courageous and bold individuals like our amiable Ogbeni that can choose to transcend the petty “play safe” politics of Nigeria and instead decide to be a statesman, who will do all in his power, according to the rule of law, to ensure and secure the future even, at the risk of losing so-called political points graded by biased opposition. But I am sure the good people of Osun know better. CHANGE is the accepted creed of progressives and a change forward is what Osun must embrace.

In the history of political development of nations, it is important to note that any nation or state that will be economically and socially buoyant has to go through a period of revolutionary uneasy changes. One I can liken to a process involved in “Road construction” where signs such as “SLOW DOWN, CLOSED, and DIVERSION” are boldly inscribed to warn road users of the changes going on. For road users, this period often takes great measure of patience, due to traffic, longer diversion routes or closed pathways, but when the road is done, everyone is happy. Aregbesola’s administration has parted ways with the status quo in many ways, as he has taken seemingly impossible albeit bold steps to redeem the image of our dear state and all he is asking for is patience and another chance, as every step taken culminates into a promise kept.

There are many so-called truths being peddled by some biased minds, but the real truth is that; although Ogbeni is not there yet, but he is on the right track and closest to the best welfare oriented governor we have had in decades. It is real to point out that asking for patience from the good people of Osun is a big demand since past administrations have shown that government is simply not to be trusted.

Ogbeni Rauf Aregbesola is not disconnected from this truth and pain of the people and that is why he has been doing many things at once, trying to convince the good people of Osun that he will deliver on all his promises. To discerning and unbiased minds, he seems to realise that to whom much trust is given, much services are also expected, hence his down-to-earth, open-door policy, and charismatic public display approach backed up by strategic, welfare oriented governance.

Ogbeni asked for our mandate before, secured it, was denied and eventually fought to claim it, and he has shown that the State of Osun can go places if strategic plans are followed; He has been widely-acclaimed and awarded on his numerous programmes. In fact, he has done well, and we can only strive forward to achieve the much-needed changes, which can only be achieved when we give him another chance at the polls to finish this unravelling wonderful political welfaristic strategic masterpiece. 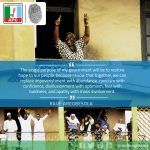