Cocoa Industry In Ede To Bounce Back Soon- Aregbesola

Governor of the State of Osun, Ogbeni Rauf Aregbesola has said that the moribund Cocoa Product Industry in Ede would soon become operational.

He spoke through his Senior Special Assistant on Community Forum, Olatunbosun Oyintiloye on weekend at a public sensitization programme in Ede on government policies and programmes.

According to him, the government had last year signed a Memorandum of Understanding with Chinese Company for the resuscitation of the industry, saying, “the resuscitation process is now at final stage”.

He said: “The resuscitation process of CPI is almost at the final stage and what this means is that we are bringing the industry back to life fully.

“When it is back to life, it will boost the economy of Ede, its environ and Osun in general and it would create job for our youths.

“This development is a departure from the past, this commitment is for real, he said.

Aregbesola then noted that the on-going resuscitation of the industry was one of the promises made by his administration which has now become a reality.

Calling for the continuous support of the people before, during and after the August 9 governorship election, the governor emphasized that he would continue to encourage investors through his policies and programmes to boost the economy of the state.

The governor re-emphasized the need for the people to ensure the sustenance of the peaceful co-existence in the state, urging that the youths should not allow themselves to be used for security breach.

Speaking at the Forum, the Timi of Edeland, Oba Munirudeen Adesola Lawal usd the occasion to drum support for Aregbesola’s administration to ensure success in his developmental policies and programmes. Oba Adesola said that the programmes of the administration has benefitted the generality of the people of the state and deserve to be supported.

The monarch noted, “we are fully in support of the administration and with this support, we are optimistic that more development will come to this state”.

The company , which was grossly undervalued at 156 million naira is now worth 544.5 million naira by the effort of independent valuers from both sides.

In the new arrangement the state government shall own 30% equity share  while the 70% equity share of the Chinese company shall be one billion twenty-one million, five hundred thousand naira(N1,021,500.00) only.

Also the new arrangement provides that  the board of directors of the company shall consist of  five directors, two representing the interest of the state while the other  shall be appointed by the Chinese firm. 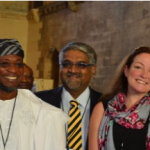