Osun Bans Indiscriminate Use Of Siren

The Osun Government on Thursday banned indiscriminate use of siren in the state, the News Agency of Nigeria (NAN) reports.Mr Sunday Akere, Commissioner for Information and Strategy, announced the ban in a press statement he signed and made available to journalists in Osogbo.

“The governor exercising the powers vested in him by the Constitution of the Federal Republic of Nigeria 1999 (as amended), and Section 10(2) of the Police Act, Cap. P19, Laws of the Federation of Nigeria, 2010 has through this instrument prohibits the indiscriminate use of siren in the state,’’ the statement said.

Akere said those exempted from the ban were the police, ambulances, fire-fighters and the Armed Forces who by the nature of their duties were mandated to use siren.

He added that apart from those listed, nobody was allowed to use siren within the territorial boundary of the state.

“Anybody that contravenes the letters of this instrument should be prepared to face the full wrath of the law. As this constitutes noise pollution which is not healthy for our society,’’ the statement said. 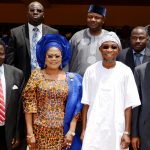