It can well be described as a triumphant entry into the ancient city of Ikire in Irewole/Ayedaade/Isokan federal constituency as the campaign train of Ogbeni Rauf Aregbesola hit the town in continuation of its campaign towards the August 9 Governorship election.

Men, women, old and young trooped out amidst drums and dancing from neighbouring towns and villages to welcome the train of the Governor as he acknowledged the waves and cheers from the obviously excited crowd.

It is the second of the Governor’s campaign towards his re-election bid after that of Ile-Ife.

The first point of call was the palace of the Akire of Ikire, Oba Olatunde Falabi where the Governor received royal blessings from the monarch.

Oba Falabi stated that the achievement of the Governor in the last three and half years has been unprecedented and the people of the area will continue to be grateful to the administration of Ogbeni Aregbesola.

“Ikire and the whole of this constituency is in support of you and you are going to be reelected into office, my people will vote for you.” Oba Falabi stressed.

Ogbeni Aregbesola’s campaign train then moved to St John Primary school were a mammoth crowd were already waiting for the Governor.

Speaking to the excited well wishers and supporters of the party, Ogbeni Aregbesola maintained that his administration is ready to continue to work for the progress of the state in all spheres of life.

He explained that he is seeking re-election so as to complete the ongoing projects across the state while stating that the administration still has a lot of good to offer the people of the state.

“What you have seen in the last three and half years is nothing compared to the developmental projects we still have in stock for you, we want to continue to work for the progress of our state.”

“We are of the opinion that power is a responsibility to serve the people and that is why our government is different from the others.”

“We are committed to the development of the people, we are messengers of God whom have only come as politicians and we are being supported by God in all we do and we believe we shall succeed in our quest to move our state forward.”

“It is the dream of this administration to take this state to greater heights and we assure that with your support Osun will be great and our efforts will not be in vain.” Aregbesola stressed.

While noting that his achievements in the areas of Education, health, infrastructures and Agriculture were enough for the opposition to see as dividends of democracy, Ogbeni Aregbesola enjoined the electorate not to believe the antics of those that want to govern the state by force.

Ogbeni Aregbesola who described positions of authority as huge responsibility which should be occupied by people of impeccable character said his party would not derail from it’s programmes aimed at improving people’s standard of living.

He enjoined residents of the state to guard their voters cards jealously to enable them vote for candidate of their choice in the forthcoming governorship election while promising the people of Orile-Owu adequate electricity and enough transformers to needed areas in the state.

The first civilian Governor of the State, Senator Isiaka Adetunji Adeleke said APC remained the party to beat in the August ninth election saying no stone would be left unturned towards ensuring the success of the party.

Senator Adeleke said he decided to dump the people’s Democratic party for All Progressives Congress because of the people of low integrity controlling the party.

“I am really happy to have decided to decamp to the APC because the PDP are full of people who don’t have the dream of moving our dear state forward.”

“I want you the people of Osun to join hands with us to defeat Omisore in the coming elections and I am assuring you that Adejare Bello will not win even his ward in Ede.”

“Aregbesola has done so much for the state especially in the area of education and infrastructural development to deserve your votes, I urge you to vote for him if you want him to continue the good work.” The former Governor stressed.

In a remark, the Chairman, Local Government Service commission, Elder Peter Babalola enjoined people to be prepared ahead of the election and assured the Governor of massive votes on election day.

Earlier, the State Chairman of the All Progressives Congress, Elder Adelowo Adebisi urged people of the area to vote for the party’s candidate for continuation of Good governance. 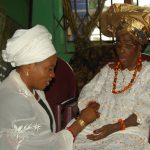 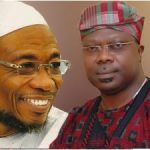