About 1370 AD, the founder of Osogbo land, Oba Gbadewolu Larooye, and a hunter, Olutimehin, settled in the sacred Osun forest to establish the kingdom and thereafter, actualised a pact of association and togetherness with the River Osun deity.

The pact, rekindled every August, was the foundation of the Osun-Osogbo festival that has culminated into a huge tourist attraction.

The Osun groove was officially enlisted as a World Heritage Site by the United Nations Educational, Scientific and Cultural Organisation (UNESCO) in Durban, South Africa, on July 15, 2005.

Recently, a 4-man delegation led by the principal coordinator of the 2014 Osun-Osogbo festival, Chief Jimoh Buraimoh, was at the National Commission for Museums and Monuments (NCMM) in Abuja to seek ways of improving the festival.In his address, the director- General of the NCMM, Mallam Abdallah Yusuf Usman, announced its plans to upgrade the annual festival to one of the best investment destinations in Africa.

This, he said, would be achieved by reviewing the management’s plan with stakeholders in order to discover the challenges confronting the sites so that it would continue to provide employment opportunities for the people.

“The management’s plan is due for review and we intend to organise a meeting with stakeholders to review the plan and see what we have been able to document in the last four years, identify the challenges we face and see how we can overcome the challenges so that we can push the site as one of the best investment destination in Africa,” Usman said.

He noted that culture and tourism were contributory factors that led to the rebasing of the country’s gross domestic product (GDP), saying that Osun-Osogbo festival’s contribution had been very significant.

“We were informed earlier that the rebasing of our economy has put us as the greatest economy in Africa and the contributions of culture and tourism were as significant as have never in the past. The Osun-Osogbo festival is one of such contribution has been very significant,” the NCMM boss noted.

While assuring of his unflinching support to managing the site, he stressed that culture was an enterprise that would empower the people and provide employment opportunities.

“The festival is an age-long event that attracts Yoruba’s and other Nigerians that are interested in culture and tradition but the participation of the private sector has made it an important site and festival. It is very clear that the promotion of culture is not just about history, artefacts, sites but also an enterprise; it is a project that can put food on the table of many people, and support creativity and invention; it is a source of employment and poverty alleviation.

“We will continue to work with you to promote the site so that it will continue to provide employment for the people. We are the institution that is supposed to be overseeing the management of the World Heritage Site but the Osun groove is owned by people who believe that it is a place where people visit and get cure from one form of illness or another,” Usman said.

On his part, Buraimoh was optimistic that every family in Osun State was committed to the festival, stressing that it was the reason for its identification as one the most unique festivals in Nigeria.

“Every family is committed to the Osun-Osogbo festival and this is why it is the most unique festival in Nigeria. It is a community programme that we must do because it affects all families, whether Muslims, Christians or traditionalists. Whether there is war or not, problem or no problem; the festival must be celebrated because it has been mandated that it must be done every year,” Buraimoh said.

While thanking the state government for providing the pavilion, he further commended the NCMM for working tirelessly to ensure that the pavilion was well erected.

“We happened to be the people that modified the festival to what it is through the help of our consultant. Today, we thank God that the groove has a new look. The state of Osun contributed its own quota by giving us the pavilion which was equipped through the NCMM,” he further stated.

Also speaking, the chief consultant of the festival, Mr Ayo Olumoko, was confident that the festival had boosted the image of Nigeria and stated that the programmes had been improved every year.

“We are here to talk about how our programme will wax stronger, especially to seek the intellectual aspect of your support. The Osun- Osogbo festival has been doing good things for this country and the programmes have been re-engineered every year since we started in 2008. If there is any good thing that is happening in Nigeria, it is the Osun-Osogbo festival.

“From 2002 to 2004, we worked tirelessly to ensure that we have another UNESCO-listed site in Nigeria. Many were presented but fortunately, the Osun-Osogbo festival was listed through the efforts of the NCMM,” he concluded. 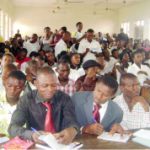 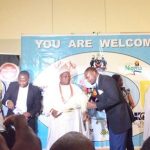