OSUN 2014: Aregbesola Will Create More Jobs And Not Sack Workers

Governor Rauf Aregbesola of Osun said on Wednesday that his administration was aimed at improving welfare packages of civil servants and creating more jobs, without any plan to retrench or sack any one.

The Special Adviser to the Governor on Environment & Sanitation, Honourable Bola Ilori, on behalf of the governor, made this known in an interview with the News Agency of Nigeria (NAN) in Osogbo.

Ilori said,” With the ongoing rumors that the present administration would sack or retrenched civil servants, should be debunked and considered as mere tools being used by political opponents to lure electorates.”

He said,’’ Aregbesola had set up plans to recruit more civil servants in the state, with the establishment of more agencies and also improved welfare packages of staff.’’

“Looking at cocoa industry in Ede, the ultra modern Abattoir within the state, and other government establishment yet to be commissioned, shown that more jobs would be created.

“More agencies would be established, to monitor and ensure that the beautification and construction projects are maintained to international standards.” Ilori said.

According to Ilori, ‘’ The diversification of the economy had really made Osun to be recognized internationally and also regarded as the fast growing economy in Nigeria.’’

He said, ‘’ the present administration increased the number of staff from every sector of the economy, and also ensure that those at the grassroots were not denied the dividend of democracy.’’

The SA called on party faithful who are yet to get permanent voters’ card at their respective local governments, to collect their voters’ cards, in order not to be disenfranchised in the forthcoming August 9 governorship election.

He decried the negative effect of not collecting voters cards before the election date, and called on party supporters group within the wards, to enlightened and educate people on the essence of having their voters’ cards at hand.

Ilori, however, urged supporters of the All Progressive Congress (APC) in Osun and people of Osun, to come out en masse and also enjoined them to shun any act of violent, during and after the exercise. 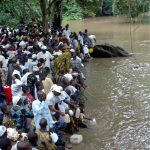