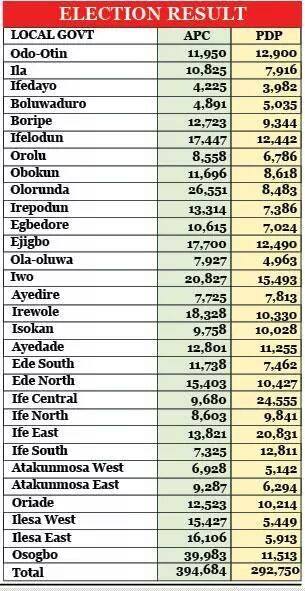 Governor Rauf Aregbesola of Osun State has expressed his gratitude to the people of Osun State for re-electing him chief executive officer of the state for another four years. Ogbeni Aregbesola who said this via a statement on Sunday, August 10, 2014, condemned the militarisation of the state during the poll, noting that the election witnessed an abuse of our security agencies which he said amounted to corruption of their professional ethics and integrity. The re-elected governor also stated that his administration will continue to transform the state and will leave no stone unturned in the process.
Aregbesola who was the governorship candidate for the All Progressives Party won elections in 22 out of the 30 local government areas of the state, scored a total of 394684 to beat his main rival and candidate of the People’s Democratic Party, PDP, Senator Iyiola Omisore who won in eight local government areas, scored 292747 votes.
While Sen Sunday Fajimi of the Alliance for Democracy scored 1982; Alhaji Fatai Akinbade of the Labour Party scored 8898, while the candidate of the Social Democratic Party, Elder Sunday Akinwusi scored 534. AUGUST 10,2014 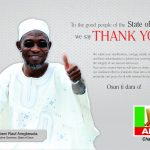