As Governor Rauf Aregbesola and members of his political party, All Progressives Congress (APC), began the defence of his victory at the August 9th Governorship Election in Osun State before the three-man Election Petition Tribunal Panel, four of the witnesses who appeared before the tribunal had told the court that the election was hitch-free and devoid of manipulation.
The witnesses including a retired police officer, Folorunsho Olojede, a retired civil servant, Akinropo Adeniji, Mrs. Racheal Babatunde, and Rauf Ajide Olaegbon, told the election petition tribunal that there were proper accreditations and voting where they voted, adding that there was no attempt to disenfranchise anybody in the polling units.
The witnesses, who claimed that they were neither politicians nor members of APC said they were ordinary voters but volunteered to give evidence before the tribunal to make record straight.
It would be recalled that the Peoples’ Democratic Party (PDP) governorship candidate, Senator Iyiola Omisore, is challenging the re-election of Aregbesola and the All Progressives Congress (APC) on the ground that there were no proper accreditation and voting, that additional voting points were not created and that some voters were disenfranchised.
Omisore is challenging election results in 17 local government councils of the state, claiming that votes declared in favour of Governor Rauf Aregebsola were not legitimate.
To prove that he won the election convincingly, Aregbesola had listed several documents and over 500 witnesses who would confirm to the tribunal that the election was the true reflection of the wishes of the people as expressed on August 9, 2014.
Listed among the witnesses are APC’s polling agents and voters who witnessed voting processes in the various units being challenged.
Mrs. Babatunde was the first witness to appear before the tribunal and she told the tribunal that she was neither a member of APC nor any other political party, saying when she got to her polling unit in Ward 8 of Olorunda Local Government; she was properly accredited and eventually voted.
Explaining that she was not an agent of any political party, but ordinary voter who witnessed what happened at the polling unit on the election day, the witness further said that the processes followed on the said day was peaceful, as nobody was harrased nor chased away.
She added that she stayed behind until after the election and the APC won at the unit, adding that she saw agents of all political parties counter-signing the result form for the unit.
Another witness, Folorunsho told the tribunal that there was no any case of inducement of voters on the Election Day in his Ward 3, Unit 6 of Olorunda local government, saying nobody was disenfranchised on the said day.
He testified that after the election, votes were counted, announced, counter-signed by party agents and pasted on the wall, saying, “when I heard that the election is being challenged, I was baffled and wondered how such peaceful election could be taken to tribunal.
“When I heard that the result of the election is being challenged, I volunteered myself to testify in this case to confirm that the election was very peaceful.
“I am a retired police officer and I don’t belong to any political party. I was just a voter on that day. I decided to come and testify because of the development Aregbesola has brought to Osun and what he is still doing”.
In his evidence, Akinropo told the court that accreditation was properly done and voting was conducted in a peaceful manner, saying nobody voted more than once on the said day.
He said the result announced for his unit was the true reflection of the people wish, saying, no party was allocated votes.
As against the claim that additional voting points were not created, all the witnesses told the tribunal that additional voting points were created for their various units.
Also, Olaegbon testified that he was accredited and voted, just as every other voter was allowed to vote on the said day.
He said he witnessed the accreditation, voting and announcement of the result on the said day.
Subsequently, Aregbesola counsel sought adjournment till Tuesday and it was granted.
Explaining the rationale behind request for adjournment, the APC Counsel, Rotimi Akeredolu (SAN) said the request was strategic, saying the petitioners have not make any case before the tribunal.
Saying that the witnesses called so far were unshakeable under cross-examination, Akeredolu said “we want to take our time to make sure that the witnesses we are calling are as good as the ones we have called. The witnesses have done extremely well”.
Omisore’s counsel, Chris Uche (SAN) also said they were happy with the progress made so far.
DAILY INDEPENDENT 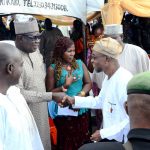 PHOTO NEWS: Declaration Of Osun APC Flagbearers To National And State AssembliesDecember 10, 2014
Osun Indigenes In US Promise Support For AregbesolaDecember 11, 2014 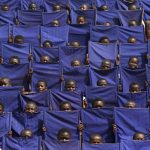