THE Election Petition Tribunal adjudicating over complaints arising from August 9, 2014 governorship election in Osun State, on Tuesday, admitted as exhibit a subpoena and four bags of ballot papers used during the exercise in Ilesa East Local Government.
Standard bearer of the Peoples Democratic Party (PDP) in the poll, Senator Iyiola Omisore, is contesting the result of the election won by the candidate of the All Progressive Congress (APC), Governor Rauf Aregbesola, in 17 local local government councils, including Ilesa East.
At Tuesday’s sitting, a star witness and forensic expert, presented by the petitioner, Omisore, Mr Pius Bakare, appeared before the commission to give his testimony.
The lead counsel to the petitioner, Dr Alex Izinyon, leading the forensic expert in witness, tendered a subpoena and four bags of the ballot papers produced by the Independent National Electoral Commission (INEC).
However, the move was objected by counsel to the 1st Respondent (Rauf Aregbesola), Akin Olujimi, APC counsel, Professor Yemi Osinbajo and counsel to INEC, Ayotunde Ogunleye.
In his argument, Olujimi contended that the subpoena tendered from the bar by Izinyon was not a Certified True Copy (CTC), hence it is not admissible before the panel, stressing that the forensic expert brought by the petitioner had no connection with the subpoena.
He also maintained that there was no fact to authenticate that the sacks of ballot papers brought to the court were produced by INEC officials.
Olujimi, who observed that the expert witness was not the author of the documents and therefore cannot tender them, said that certain marks were made on the subpoena which makes it inevitable for the person who made the marks to be cross-examined.
TRIBUNE 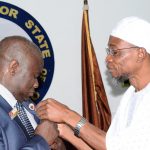 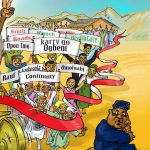