Governor Rauf Aregbesola on Monday, said the Osun Chapter of the Social Democratic Party (SDP) cannot seek to confuse or deceive President Muhammadu Buhari by simply adding up bogus figures or revenues in order to blackmail the government.
Aregbesola, while responding to a request to the President by the SDP to commence his battle against corruption by probing the administration of Aregbesola, said just as it’s failed governorship candidate, Segun Akinwusi, the SDP has demonstrated crass ignorance of basic issues of governance.
A statement signed by the Director of Communications and Strategy, Office of the Governor, Mr. Semiu Okanlawon, ‎said that assuming without conceding that SDP’s figures of revenues that accrued to Osun are even correct, what the party has simply said is that nothing like development work took place throughout the period in question.
Where does the SDP want to place the chains of monumental projects‎ that have hallmarked the Aregbesola administration.
The people of Osun were neither daft nor blind to these achievements, hence, their fanatical support for his re-election despite orchestrated lies by the likes of SDP and it’s shameless allies like the PDP.
We are not surprised by SDP’s imagined ambition to outdo the PDP in its penchant for fabrication.
Expectedly, their ability to lie dug for them their electoral grave.‎
For instance, it was PDP that originated such lies as son of the Governor being a contractor awarded the fictitious N8bn Opon Imo project; a project that has cost the state less than N2bn so far.
So also it was PDP that falsely accused the wife of the Governor of being the contractor that got the Osun School Uniform project.
Did it take much sweat for the Sam and Sarah, an indigenous garment factory in Nigeria, to scuttle the lies and claim it’s ownership of the Osun School Uniform project?
Till date, no one has disproved the fact that through a creative partnership with that company, Osun has benefited from the muti-billion Naira Omoluabi Garment Factory, which has also become a veritable source of employment for more than 3, 000 youth of the state
Weak lies such as these that sank the PDP are the same the SDP is regurgitating.
‎ But for Aregbesola’s ingenuity and the deep commitment of his administration to a rapid development of Osun, what accrued to the state in form of revenue was nothing compared to massive investment in infrastructure ( as can be illustrated by the completion of over 900km of roads before the end of his first term.)
Same goes for the state-of-the-art schools that are now beautiful sight to behold across the state.
It is clear SDP enjoys no touch with the grassroots of Osun, otherwise‎, it would have saved itself the embarrassment of not recognising the 40, 000 youths, who formed the two batches of the Osun Youths Empowerment Scheme (OYES).
With that scheme alone, N200 million entered the economy of the state every month for a period of four years.
But obviously, SDP and it’s leaders are so bereft of ideas that they cannot recognise the security implication of unleashing a huge population of 40, 000 jobless youths on the state had Aregbesola not been creative enough to set up the scheme.
It is obvious that SDP and it’s leaders have failed to recognise the fact that the development model employed by the Aregbesola administration in Osun became the reference point for the APC in its nationwide campaign in spite of the unfortunate national revenue crisis.
No one can fault the solid development foundation that the Aregbesola government has laid.
Therefore, the party should realise that it has only succeeded in making itself a laughing stalk in the estimation of President Muhammadu Buhari rather than convincing him that there is something to be probed about the Aregbesola government. 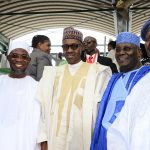 PHOTONEWS: Swearing-In Of President Muhammadu BuhariMay 30, 2015
SPEECH BY THE GOVERNOR OF THE STATE OF OSUN, OGBENI RAUF AREGBESOLA, AT THE INAUGURATION OF THE SIXTH OSUN STATE HOUSE OF ASSEMBLYJune 3, 2015