Governor Rauf Aregbesola of Osun State has declared that the Federal Government was waging war against its citizens with the reduction in the monthly allocations to states and local governments.
Speaking, yesterday, in Ejigbo, Osun State, at the commencement of a retreat organised for members of the state House of Assembly on the 2014 Budget, Aregbesola  stated that “any nation that experiences what Nigeria is currently passing through is in a war situation”.
He added that  any country that has its revenue reduced by 40 percent consistently was in a serious crisis.
His words: “The situation, today, in Nigeria is likened  to a family who lives on N200,000 monthly, but suddenly had it  reduced to N120,000. That is the dilemma we found ourselves in today.
”This is the situation Nigeria has found itself  in since July 2013. We are in a war situation. This is a national disaster.”
Aregbesola noted that since last year, only few states have been receiving allocations that can barely pay their workers salaries.
”The situation in Osun today is that our allocation is not enough to pay workers’ salaries and pension since  July last year”, he said.
According to him, the claim in some quarters that Nigeria  is in  a bad  economic situation as a result of oil theft  is bogus.
The governor,  however, disclosed that  Osun is among the seven  fastest growing economies in the country  as a result of his administration’s economic policies.
Earlier, the Speaker of the state House of Assembly, Hon. Najeem Salam, said that indications from the last two budgets of the state showed  the state was moving forward.
http://www.vanguardngr.com/2014/02/nigeria-war-situation-aregbesola/#sthash.UjjD4Ido.dpuf

204 Views
9
Aregbesola: Between A Governor And A Paymaster By Abiodun KomolafeJune 17, 2015
PHOTO NEWS : Aregbesola at Jumat Service Central Mosque Oja-ObaJuly 1, 2015 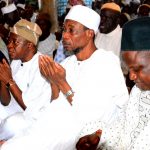