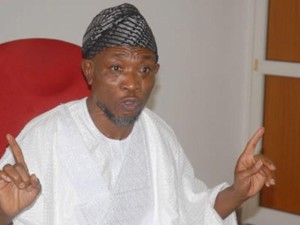 The Governor of Osun, Ogbeni Rauf Aregbesola on Monday gave out statistics which show clearly that students’ performances in public examinations under his administration have confirmed remarkable improvements in the quality of education in the state.

The Governor described as unfounded the allegation of detractors that the performance of pupils has gone down under his watch.

Speaking at the World Teachers Day in Osogbo, the Governor said a remarkable 61 % improvement has been recorded.

“Compared with the average performance (13.26 per cent) of the three years that preceded us, the percentage improvement in performance during our tenure is a whopping 61 per cent. You can’t fight with figures”. Aregbesola emphasised.

The Governor assured all that his administration will complete all projects it has started in the state including that of the construction of one hundred and seventy new state-of-the-art schools.

In his speech titled “Empowering Teachers, building sustainable society” at the 2015 World Teachers, Aregbesola noted that it is the dream and aspiration of the present administration in the state to turn around education saying, education has been accorded prime importance by his government right from inception.

He pointed out that his administration before the present cash crunch in the country, had scored ‎several firsts in the education sector, with novel ideas that have positively revolutionised the sector in the state.

Aregbesola added that the lasting legacy that his administration is particular about is the building of an enhanced environment of learning.

He stressed that his administration has come to the realisation that school environment largely determine the quality and character of students produced hence the concentration on the provision of such environment.

According to him, “before the present cash crunch, our administration increased the running cost on students. Against the paltry N200 paid by the last administration, we now pay N400 on pupils in Elementary Schools and N500 for those in the Higher Schools and there was timely and adequate supply of modern instructional and learning materials to all our schools.

“Our free school meal programme takes care of about 254,000 pupils in the Elementary Schools. We also gave out two pairs of new school uniforms to all pupils and students in our public schools. We came up with a novel idea, the e-learning tablet, Opon Imo.

“We are already having the results. The badly behaved pupils in dilapidated and run down schools are now well behaved when transferred to the new, beautiful schools that give them pride and enhanced personality”. The governor told the teachers.

‎He however added that result of students have not been satisfactory to him, but there has been a significant improvement arising from government efforts.

He said that “Public‎ Educationis the inherited legacy that your government can be proud of, considering the huge investment made into the sector by your administration.

“We hereby call on you not to relent in your efforts towards enhancing quality education in the state, for this is the last hope of the children of the down-trodden electorate. Proliferation of mushroom private schools will be discouraged with the people’s confidence in the public schools‎”.

He also commended Aregbesola for everything he has done for workers and teachers in the state despite the cash crunch being witnessed in th‎e country.

NLC boss said, “We want to thank you for what you have been doing for workers in the past few weeks but like Oliver Twist, we will want to use this occasion to ask for more because there is always room for improvement”.

Also speaking earlier, Osun Head of Service, Mr. Sunday Owoeye charged teachers to help government in lessening the burden of educating students by taking seriously the issue of re-educating themselves.

“We must upgrade ourselves as teachers so that we would not be left at the train station, we must be IT literate so that we can be breast of latest technologies and development,” the Head of Service told the gathering teachers. 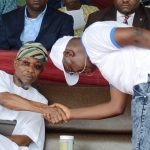 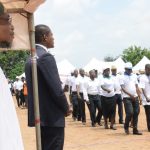