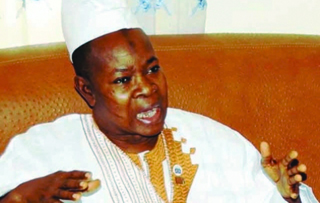 A prominent Ibadan-based businessman, Alhaji Dawud Akinola, was on Saturday installed as the new Aare Musulumi of Yorubaland, to succeed the former title holder, the late Alhaji Abdul-Azeez Arisekola-Alao, who died on June 17, 2014.
The certificate was presented by Osun State Governor, Rauf Aregbesola, while the turbaning was carried out by the representative of the President-General, of NSCIA in conjunction with the President-General, League of Imams and Alfas.
Sheikh Habeebullah Adam Al-Ilory, the Rector of Agege, Lagos-based MORCAZ, in a sermon, said that the assignment of the Aare Musulumi was a great one that required devotion and absolute commitment.
The Islamic scholar urged the new Aare Musulmi to be committed to the task ahead of him and lead by example at all times, by emulating the great leadership style of his predecessors.
Former Lagos State Governor, Senator Bola Tinubu, who was the Chairman of the occasion, praised the late Mr. Arisekola-Alao, saying he was wealthy, humble and very generous in his life time.
Represented by Oyo State Governor, Abiola Ajimobi, also urged the new Aare to emulate the leadership style of Arisekola-Alao, whom he said devoted all he had to the upliftment of Islam and humanity.
The Governor, in his own personal remarks, urged Muslims to establish schools where children could learn morals, and vocations to cope with the challenges of life, and implored Akinola to prepare for greater challenges as the new Aare.
“Arisekola-Alao was a rare breed whose leadership acumen and generosity transcended Yorubaland.
“Anytime I look at the man to be turbaned today, I pity him because he would have to devote all he has to justify his new leadership status,’’ he said.
Also speaking, the Sultan of Sokoto and President-General, Nigeria Supreme Council of Islamic Affairs (NSCIA), represented by Prof. Ishaq Oloyede, NSCIA Secretary-General, said the new position was to rally the Imams for the development of Islam, and urged Akinola to see his new position as an opportunity to lift Islam to greater heights.
The Sultan stressed the need for the teaching of religious studies from the primary school level to secondary school, saying lack of this had bred indiscipline.
The new Aare Musulmi, in his acceptance speech, pledged to serve in the new capacity with all he was endowed with by God and would never let the people down, and promised to work in harmony with all Islamic title holders to improve on the legacy left behind by the late Arisekola-Alao during his life time.
Akinola also solicited the cooperation of all Islamic organisations as well as the Muslim Ummah of South-West Nigeria in fostering unity among the faithful.
Among the prominent dignitaries who graced the occasion were Governor Abiola Ajimobi of Oyo State, his Osun counterpart, Rauf Aregbesola, the Minister of Communication, Adebayo Shittu, and Michael Adeyemo, the Speaker of the Oyo State House of Assembly.
Others were Alhaja Aminat Abiodun, the Iyalode of Ibadanland, Yekini Adeojo, Sheikh Jamiu Bello, President-General, League of Imams and Alfas of Yorubaland, Edo and Delta States and Adebayo Adelabu, Deputy Governor, Central Bank of Nigeria, Seyi Makinde, Sheikh Muyideen Bello, as well as politicians and Islamic clerics from all over Nigeria.