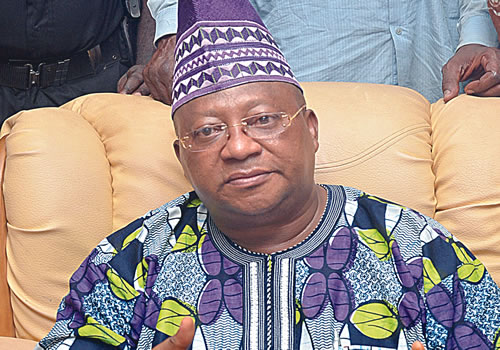 This was contained in a press release issued by his Media Adviser, Alhaj Olumide Lawal.
Adeleke, while thanking Aregbesola for this magnanimous show of love for Ede people, called the attention of the government to the need to give the present Ede-North Local Government Area, an additional full-fledged local government area, instead of an administrative area office, created for it presently.
Ede-North Local Government Area, Adeleke stated, has more than 125 polling units, “a situation that qualifies it to be so split into two.”
Adeleke also thanked the speaker, Osun State House of Assembly, Najeem Salam for doing the needful, by immediately rectifying the anomalies that arose from the erroneous “ceeding” of some parts of Ede-North Local Government Area to Osogbo-South Local Government. The action of the speaker, was seen by Adeleke, as “that of a leader with listening ears, when Ede people robustly complained to him over the anomalies.”
The Senator said: “The issuance of a white paper by the government, within 24 hours to correct the stated anomalies has gone a long way to assuage the pains of Ede people over the matter.”
Senator Adeleke also thanked His Royal Majesty, The Timi of Edeland, Oba Munirudeen Adesola Lawal, Laminisa I, the Timi-in-council and indeed, the entire indigenes of Ede at home and in diaspora, for maintaining absolute peace, calm and restraint, at the face of extreme provocation, associated with the exercise as it concerned the alleged but already rectified issue of part of Ede-North Local Government Area being ceded to Osogbo-South Local Government Area.
He enjoined the good people of Edeland, to continue to be pace setters, as far as civility and absolute decorum are concerned in addressing issues that might agitate their minds from time to time.
The Asiwaju of Edeland, also thanked Aregbesola, for naming of Ejigbo Campus of Bola Ige University after him. This he said, is a great honour that he would cherish for the rest of his life.
He promised, to continue to do all within his power to give full support to the upliftment of Osun State and her people, by joining hands with all stakeholders to foster peace, love and unity amongst the various groups of people that constitute the state.