The Governor of Osun, Ogbeni Rauf Aregbesola on Tuesday called on all stakeholders in the state including the organized labour to assist government in plugging leakages so as to make the state economically independent.
Aregbesola also noted that his government would not relent in his effort to jack up the state Internally Generated Revenue, IGR, saying all hands must be on deck to improve the State IGR for economic independence.

He made the call while receiving the report of the Committee on Plugging of Revenue Leakages in the state, at Government House, Osogbo.
The Governor noted that the only way Osun could become economically stable is to be able to generate at least N5billion monthly.
Governor Aregbesola who welcomed the report, expressed satisfaction in the fact that the state has the capacity to generate triple of its current IGR basis.
The Governor said once the revenue projection of state could be conveniently upsurge to N20billion, expressing confidence that with such income accruable to the state coffer, his government would be definitely aided in meeting the all needs and obligations of the state.
He noted that it is particularly suiting to know through the report of the committee that Osun has the capacity to generate between 5 and 8billion every month throughout the remaining months of this year if all the palpable leakages are blocked.
Aregbesola stated further that it is heartwarming to know that Osun can conveniently pay salaries and execute capital projects if there is sincerity of purpose from everyone in the generation of revenue for the state.
The Governor hinted that his government would put in place a permanent committee that will be in charge of monitoring all revenues accruable to the state in order to maximize its potentials.
Commending the committee for a job well done, Governor Aregbesola said the details of the report has reflected the realizable potentiality of the state as its serves as an eye opener towards economic prosperity.
Aregbesola expressed delight that the job done by  the committee has made the state government to realize that Osun has the capacity to grow and develop without relying on the federal allocation.
He said “it interesting to know that if all leakages are blocked, our state can realistically generate between 4 to 8billion every month for 2016 alone, which can also rise to between 5 and 8.5billion per month next year and there after at least 7.5billion on a monthly basis.
“We have been made to know that with every conveniency, our state is capable to generate 4 to 5 billion this year 2016; 5 to 8billion by 2018 and 8 to 20billion by 2018.
“For this obvious purpose and economic projection, I believe it is high time to call ourselves to order for the benefit of our dear state, because having understood that Osun can conveniently generate this much as IGR if there are no leakages.
“I have said it before that if Osun can hit a revenue base of at least N5billion per month then our troubles are over.
“Because of the eye opening job this committee has done, I think its importance that a permanent committee that will be saddled with the responsibility of monitoring revenue and blocking leakages be set up.
“I am also calling on the organized labour and other relevant stakeholders to join hands with government in ensuring that our revenue are intact for the benefit of all”, he added..
Earlier, during the presentation of the report to the governor, Chairman of the committee who is also the Auditor General for Local Governments in the state, Mr Emmanuel Kolapo pointed out that a viable generation of revenue must go alongside blocking of leakages for it to be meaningful.
He stressed that all revenue generation needs to be accounted for by all relevant agencies, saying that there has to be a working synergy between all government agencies so as to boost the revenue drive of the state.
Mr. Kolapo added that the semi-formal and informal sectors of the state’s economy needs to be monitored so as not to draw the economy of the state back.
According to him, “Osun has the capacity to be great if we can block all leakages very well.
“the revenue drive of Osun can only be on a steady rise if all leakages in the system are blocked and this is not a job for the government alone, we all need to be involved.
“All sectors of the economy need to be involved, I am talking about both the semi-formal and informal sectors of the economy. 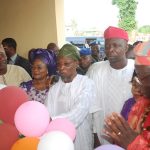